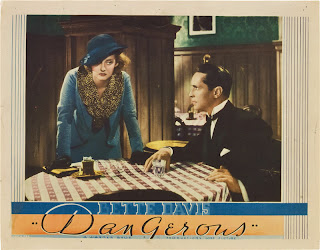 Don Bellows (Franchot Tone) is a prominent architect, who was inspired change the whole course of his career after seeing Joyce Heath (Bette Davis) perform on the Broadway stage. Later when Bellows meets down-and-out and quite alcoholic Heath whose career was destroyed by the rumor that she was a jinx, he sets out to rehabilitate her. In doing so, he falls in love, and breaks off his engagement to wealthy socialite Gail Armitage (Margaret Lindsay) despite Heath warning him that she destroys anything and anyone she touches due to her being jinxed. He risks his fortune to back the Heath in a Broadway show that will be her big comeback. Before opening night, he insists they marry or part ways for good. Heath reluctantly agrees and later that night she visits Gordon Heath (John Eldredge), a man she is still secretly married to. Thought his marriage to her ruined him financially, he adamantly refuses to give her a divorce, admitting that he still loves her deeply. Upon the pretense of them getting back together, she coerces Gordon into her automobile and while driving, threatens to cause a crash if her divorce isn’t granted. When Gordon still refuses, Heath causes an accident that cripples him for life. Her own injuries keep her from opening in the show, which fails. Don is ruined, and when he learns that Joyce has deceived him, he accuses her of being a completely selfish woman, her only true jinx.
Heath eventually sees the truth in Don's accusation. She has the show re-opened, and though she truly loves Don, she allows him to marry Gail. As the show becomes a success, Heath dedicates herself to Gordon and salvaging their marriage.


Dangerous brought Bette Davis his first Oscar. Though she accepted the award, she thought Hepburn should have won that year instead for Alice Adams and speculated that she was given the award since she lost the Oscar the year before with her role as Mildred Rogers in Of Human Bondage. I have to agree that this film is by far not Davis' best. It was quite boring, making it harder to believe the already stretched outline of the film. My interest only peaked when I could make comparisons between her Joyce Heath and Mildred Rogers at certain points in the film.
Side Note:
Dangerous was the film where Davis reportedly fell in love with and made certain advances towards Tone who was already engaged to Crawford thus causing the rumor mill to spin a yarn that this is where the already intense rivalry between the two stars really began to rev up.
Tonight on TCM!
The Magnificent Ambersons (1942) I have been wanting to see this film and for purely "cosmetic" reasons. I have read that Costello spent her later life in seclusion having been forced into retirement due to early film make-up ravaging her face. I have only seen beautiful pictures of her and find this hard to believe.
A possessive son's efforts to keep his mother from remarrying threaten to destroy his family.
Cast: Joseph Cotten, Dolores Costello, Anne Baxter, Tim Holt Dir: Jack Moss
Posted by Sarah at 5:00 AM