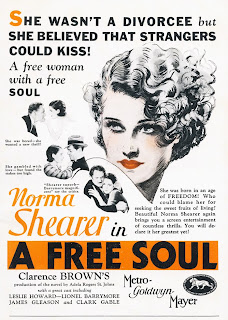 If there is one thing Stephen Ashe (Lionel Barrymore) taught his daughter it was to be a free thinker and not fall under the weight of the privileged family he and she come from. Unfortunately, Ashe cannot always practice what he preaches. Jan Ashe (Norma Shearer) loves her father more than anyone else in the world, despite the fact that he drinks too heavily and cannot get on with the rest of the family Jan would do anything for him. So when she throws over Dwight Winthrop (Leslie Howard), the ideal but slightly boring candidate for a proper marriage to start an affair with Ace Wilfong, a mobster that Ashe has defended in a murder trial; she must make a bargain with her father who vehemently disapproves. If he quits drinking, she quit Wilfong.
After three months of hiding out in the woods with both dealing with their demons, Jan and her father head into town to take the train home. Ashe succumbs immediately to his old habits and disappears. Jan returns home to find herself disowned from the rest of the Ashe family. Alone except for Eddie (James Gleason) her father’s right hand man, Jan decides to give in to temptation as her father has done and returns to Wilfong.
Unfortunately Wilfong, angry over how he has been treated by both Ashe who called him a mongrel for even suggesting he would like to marry his daughter, and Jan who left him without a word; shows his true colors by manhandling Jan and informing her she will marry him, by force if necessary. Jan manages to escape but Wilfong tracks her down the next day- there is a stand off with both Eddie and Dwight. Wilfong declares that jan has “cashed in her chips” with him already and that she belongs to him. He threatens murder should Jan and Dwight get married.
Dwight decides to take things into his own hands and shows up to Wilfong’s gambling house and murders him. His love for Jan and his need to protect her reputation force him to lie about why he killed Wilfong. In a trial to end all trials, Ashe is miraculously found and though seriously ill, he comes to Dwight’s rescue. Blaming everything that has happened to Jan and the murder of Wilfong on his bad parenting habits, he delivers an impassioned speech on his shortcomings and finally succumbs to his alcoholism when he collapses towards the close of his speech.
The movie closes on Dwight professing his love for Jan and how he would follow her anywhere. 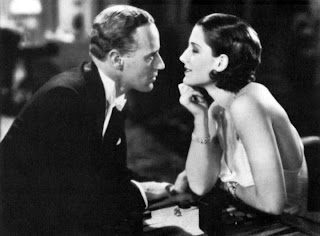 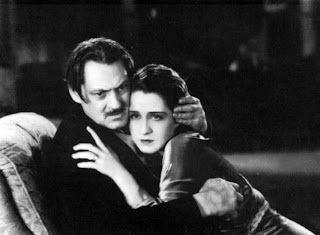 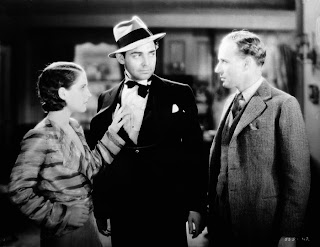 Barrymore won his only Oscar for his performance as Stephen Ashe. I think he did a wonderful job of portraying a man fighting his drinking demons and wonder if his own brother’s addiction helped in part. This movie is also the first of the only two features that both Gable and Howard starred together in. The other being, of course, Gone with the Wind. Gable’s performance in A Free Soul made the executives sit up and take notice of him for the first time. He caused such a sensation that they expanded his role as Ace Wilfong and Gable’s career as a supporting character soon came to an end.
As for Norma Shearer, this was her at her most sensual. Complete with clingy satin dress and coy put-ons, she plays the temptress well. It’s rumored that in order for Shearer to get the role of Jerry Martin in The Divorcee, she first needed to convince her husband Irving Thalberg that she could break out her usually regal roles and be sensual. She employed the services of George Hurrell, photographer of the stars, to shoot some convincing pictures and won the role. However, I found her much, much more sensual in A Free Soul.
Overall, the film had some very touching moments but towards the end the melodrama and histrionics were a bit too much for me. However, it wasn’t too much for the Academy who awarded Barrymore an Oscar, most likely due to the long, uninterrupted and impassioned monologue he gives at the end of the film.
Tonight on TCM!
Ruggles of Red Gap (1935) A Western rancher wins a British valet in a poker game.
Cast: Charles Laughton, Mary Boland, Charlie Ruggles, ZaSu Pitts Dir: Leo McCarey
Posted by Sarah at 5:00 AM