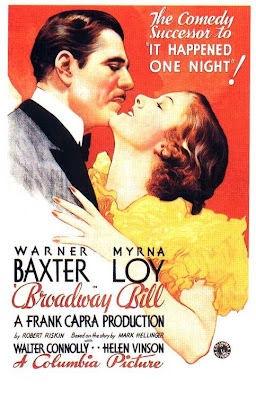 The story of Broadway Bill is one that could rival Seabiscuit who wouldn’t be well known until two years later. Dan Brooks (Warner Baxter) married into his job and though he was thankful at first and the envy of his other brothers-in-law as the crown prince of the J. L. Higgins enterprises, as of late he has been restless and horse-mad. He knows that Broadway Bill can be a champion and yearns to return to his former life on the race track. His father-in-law, J. L. Higgins (Walter Connolly) and wife Margaret (Helen Vinson) refuse to understand or empathize. His only allies are his stableman, Whitey (Clarence Muse) and his sister-in-law Alice aka The Princess (Myrna Loy).
Fed up with how J. L. runs his business, Dan strikes out on his own, leaving all security and money behind. In the course of trying to raise money to get Broadway Bill in the Imperial Derby, he and Whitey and eventually The Princess (who also happens to be in love with him) run into several road bumps along the way from Broadway Bill not wanting to race without his good luck charm, a rooster named Skeeter to Dan being thrown in jail to bad bets and sneaky jockeys. 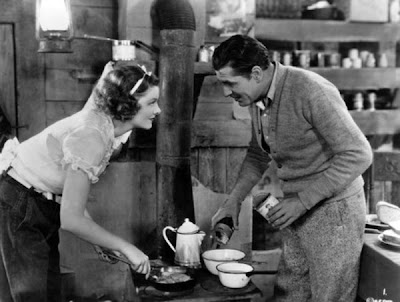 In typical Capra fashion this is a story of success from the roots up and how people can inadvertently change the course of one another’s luck as well as inspire one another to be better people. With witty repartee and wonderful performances from all the characters- most especially Colonel Pettigrew (Raymond Walburn) and his sidekick Happy McGuire (Lynne Overman), Broadway Bill is a very touching story.

Tonight on TCM! This is a pretty good film featuring two of my favorites.
Sweet Bird Of Youth (1962)A young gigolo returns to his southern hometown in search of the lost love of his youth. Cast: Paul Newman, Geraldine Page, Shirley Knight, Ed Begley Dir: Richard Brooks
Posted by Sarah at 7:33 AM