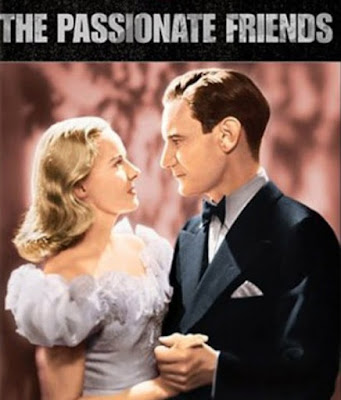 A story comprising of a flashback within a flashback, The Passionate Friends tells the story of Mary (Ann Todd) and Steven (Trevor Howard) who were once lovers until Mary refused to wed Steven, insisting that though she loved him, she didn’t want to belong to anyone but herself. Mary instead opts for a comfortable and secure, if passionless marriage to Howard Justin (Claude Rains). When Mary and Steven run into each other nine years after her marriage, the spark is still there and Mary vows to leave Howard for Steven. When Howard finds out about the affair before Mary can tell him, he convinces her to stay. Nine years later and by complete coincidence, Mary and Steven run into each other while on holiday. After spending the day together, Mary learns and somewhat regrets how happy Steven is with his marriage and children. Howard, arriving late to the hotel spots them together and mistakes their friendly encounter as another betrayal. He immediately files for divorce citing Steven as the cause. Mary is too late to warn Steven and is witness to Howard’s lawyer serving papers to Steven at the London Underground station in front of his wife. Mary, after seeing how this is destroying Steven’s family, has a brief Karenina moment at the train station but reconsiders. She calls on Steven and lets him know that there will be no divorce much to Steven’s relief. Mary then calls on Howard who is still courteous and kind until Mary tries to convince him she did not have an affair. Howard raves at her, breaking a vase and admitting he knew they were never a love match; that he was comfortable with their marriage situation until he realized he had fallen in love with her. When he turns to confront Mary after this admission, he finds her gone but she has left her purse behind. Mary, desperate now to save Steven from misery, has returned to the Underground station to kill herself. She is saved from jumping by Howard who grabs her at the last moment. Understanding the sacrifice she was about to make, Howard reconciles with Mary and they go home together. 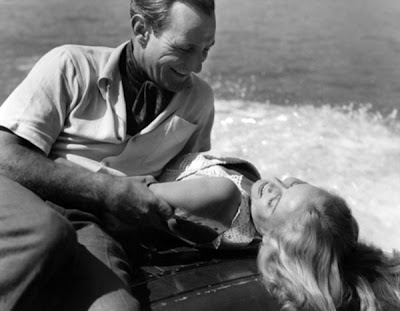 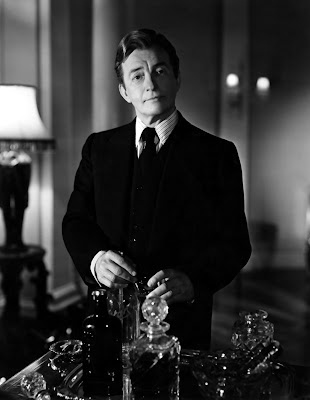 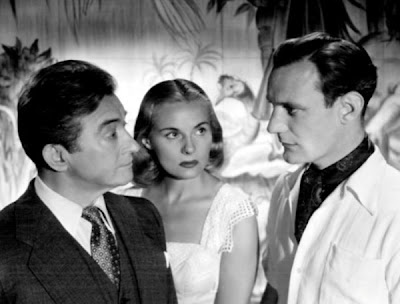 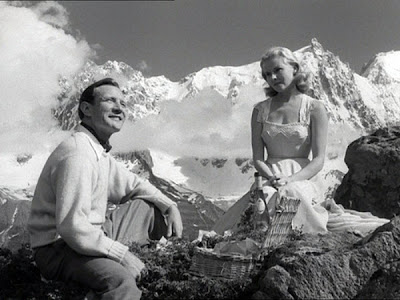 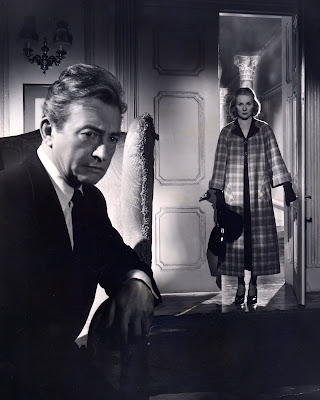 This is my second David Lean film and no, (gasp!) it wasn’t Dr. Zhivago, it was The Bridge on the River Kwai. I was absolutely enthralled with The Passionate Friends which is exciting because from what I have read, it pales in comparison to Brief Encounter (1945). Now I have another movie I must see! As for The Passionate Friends, I enjoyed this movie for a few different reasons. Let’s start first with Todd’s character Mary. Throughout the film I found her stand on marriage a bit selfish and cold however, since the movie is set in the year 1948 and not at the turn of the 20th century when H. G. Wells wrote the story and when a woman’s independence was on the level with emancipation- Mary’s view understandably loses some of its charm. But Todd makes up for it in the latter half of the film when she realizes that she truly regrets not keeping a hold on Steven, when she sees how happy he is and that she is not the cause of that happiness. Yet, instead of grasping at the chance to have him again because Howard is finally willing to let her go, she instead decides to sacrifice her life for Steven’s continued happiness. When she is standing on that platform with visible beads of sweat marking her forehead, you can’t help but wish that someone would save her. When Howard did it was a teary moment for me.
Howard is the more mature and glacial of the two men yet, Rains is able to express his passion with more flare and comprehension in just a few scenes than Howard’s character Steven throughout the whole film. Besides, Steven loses momentum as the amorous lover when he leaves Mary behind to face her husband's wrath. It is easier to feel sympathy for Rains because of the aforementioned selfishness of Mary. He is simply keeping up his end of the bargain whereas Mary keeps changing her mind thus undercutting the whole idea of belonging to herself. I found Rains almost as heroic and endearing here as in Mr. Skeffington.
Now, for the pièce de résistance of the entire film, the signs. If anyone else has seen this film and picked up on any other signs beyond the three I note here, let me know. I’m not the most observant person even when I am enjoying a wonderful film. The first sign I noticed was the forgotten theatre tickets. Mary and Steven allegedly went to the theatre to see the show First Love, aptly named as Mary and Steven were each others first loves. As the camera rapidly moves back and forth between Howard’s face and the tickets the tension in the scene builds and the viewer is privy to how torn Howard is. Should he go to the theatre and confirm what he already suspects or keep safe in his denial?
The second and third signs are at the end of the film when Mary enters the London Underground. You know what she is there to do, if not, the sign on the wall spells out her intentions. As she dazedly enters the station and before she descends into it's darkened depths, Mary pauses at the WAY OUT sign that is accompanied by an arrow. Then when Howard saves her from jumping and seats her on a bench nearby there is a poster with the word SAVED to her immediate left. I thought these signs really added another layer of richness to the film and peaked my interest in the director David Lean. 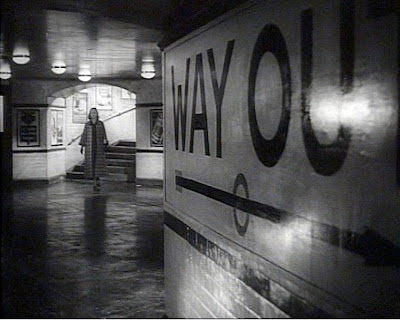 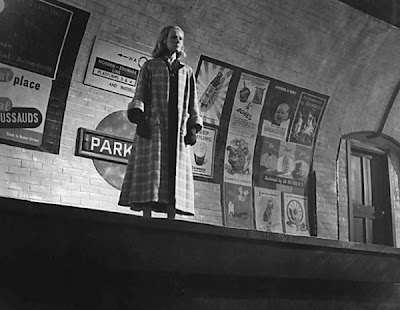 Side note:
Ann Todd, also known affectionately as "The Pocket Garbo" due to her diminutive, blonde beauty married David Lean in 1949. He was her third and final husband. He also directed her in directed Madeleine (1950) and Breaking the Sound Barrier (1952).