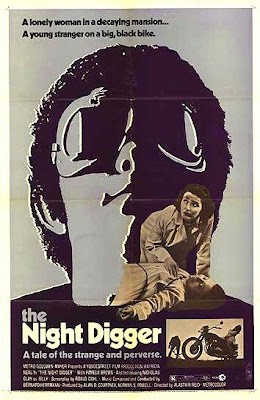 Thirty-five-year-old spinster Maura Prince (Patricia Neal) works part time as a speech therapist, spending the rest of her time caring for her tyrannical, blind, and invalided adoptive mother Edith Prince (Pamela Brown) at Edith's dilapidated old mansion in the country.
A young man by the name of Billy Jarvis (Nicholas Clay) arrives on his motorcycle to inquire about a job as a handyman. Although Maura is opposed to hiring the young stranger, Billy wins Edith's sympathy with stories about taking care of his invalid mother and by asking if he can accompany her to church. Edith hires Billy and tells him to move into Maura's room, thus displacing Maura from her own quarters.
Despite Maura's misgivings, Billy turns out to be an industrious worker. Billy slowly wins Maura's confidence and Maura tells him about her slight limp, the result of a brain aneurism she suffered several years ago. Billy asks why she allows Edith to bully her and Maura tells him that Edith adopted her from an orphanage when she was fifteen years old, and five years later, Maura walked out on her. When Billy panics about fulfilling his promise to attend church with Edith on Sunday, fearing that there could be trouble, Maura soothes him into going. At the service, Billy notices Mary Wingate, a young nursery school teacher. That’s when we see that Billy has reason to worry. He’s quite mad and anytime he sees an attractive girl, he is reminded of his earlier childhood, which we see through a series of eerie recollections, where he was possibly raped and proclaimed to be impotent. These recollections drive him to murder.
When Maura’s mother suffers a heart attack and is taken to the hospital, Billy and Maura become even closer as Edith’s nosy friend Millicent McMurtrey (Jean Anderson) observes and snitches to Edith. After a showdown in the hospital, Maura and Billy leave the mansion. Maura suspects that Billy is a murderer but vows to keep him safe.
After buying a farm on the Scottish coast, they settle into domestic contentment until one evening, while walking along the cliff’s path, Maura encounters a young woman looking for her dog. When the woman says she stopped at the farm to ask Billy about the dog, Maura, worried that Billy's psychotic tendencies may have returned starts home. Billy drives up on his motorcycle, a crazed look in his eyes. Removing his goggles, Billy mouths a plea for Maura's forgiveness. As Maura watches with tears running down her cheeks, Billy revs up the bike's engine and drives off the cliff, plunging to his death.

As I began to watch the movie I thought I was going to get a 70’s version of Night Must Fall. It had all the elements, a weary middle-aged woman caring for a tyrannical, handicapped older woman. A strong, handsome stranger who beguiles the older woman into letting him stay in her home. The murder and burial of another woman from town… it was almost the same until Billy had his flashbacks and suddenly there was nudity and the unbelievable romance between Maura and Billy. The movie was ruined by its 70’s touch and doses of realism. The ending was extremely corny though it had potential to be very moving. I was glad that Maura left her mother but she didn’t do so for a better situation. She simply repeated the mistake she made fifteen years ago by choosing the wrong man. I watched this film because I like any movie where a woman deals with an aging, difficult mother and though she is not a favorite, I do like Patricia Neal. The acting wasn’t bad per se; it was just the some of the situations in the film. I guess I am too engrossed in the 30’s and 40’s with their innuendo and make believe. I guess I’m starting to prefer it that way.
Tonight on TCM!
Ironically Night Must Fall is showing at 4pm!
A Stolen Life (1946) A twin takes her deceased sister's place as wife of the man they both love. Cast: Bette Davis, Glenn Ford, Dane Clark, Walter Brennan Dir: Curtis Bernhardt
Posted by Sarah at 6:34 AM