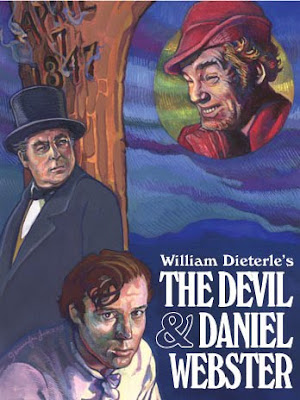 New Hampshire farmer, Jabez Stone (James Craig), knows the meaning of bad luck. So much so, he swears that "it's enough to make a man want to sell his soul to the devil!" Enter the devil, better yet, enter Walter Huston as the devil. Calling himself Mr. Scratch, he offers Stone a deal too good to pass up- seven years of prosperity, money enough to save his farm, keep himself, his wife and his mother in luxury, all for the very low price of one soul. "A soul? A soul is nothing. Can you see it, smell it, touch it? No. This soul, your soul, are nothing against seven years of good luck." Note: there is no mention of happiness, just luck. 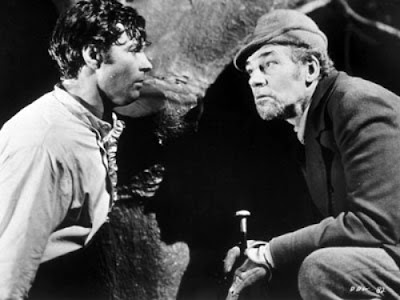 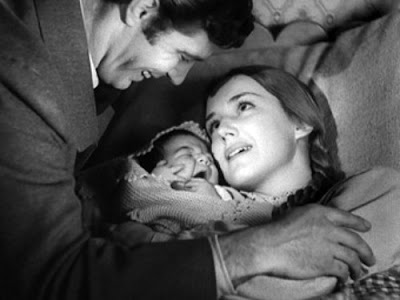 When Jabez's seven years are up and his only option for renewal comes at the price of his son's soul, Jabez turns to the all powerful and respected lawyer and orator Daniel Webster to argue his case with the Devil. "I'd fight ten thousand devils to save a New Hampshire man." 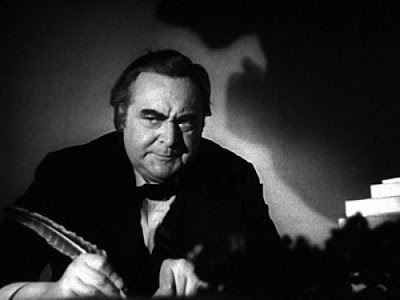 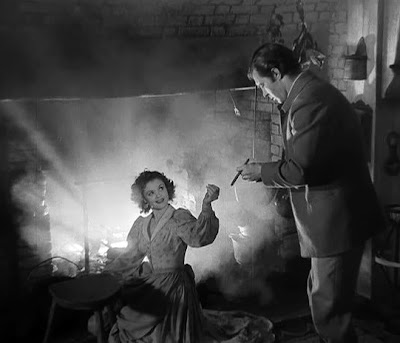 At midnight of the appointed date, Mr. Scratch arrives and Daniel Webster Edward Arnold) presents himself as Stone's attorney. Mr. Scratch provides a jury of other damned souls and the debate begins. Will Webster win or lose his soul trying to save Jabez Stone? 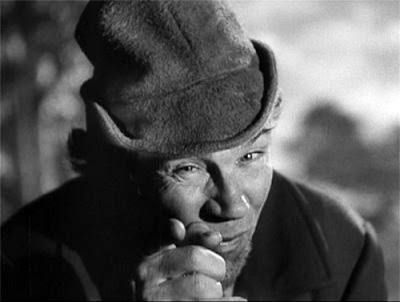 The inconsistancy is Jabez's luck compared to Miser Stevens, Mrs. Stone's (Ann Shirley) milksop performance, and Daniel Webster's easy confidence over fighting the devil convert a moral tale into a sappy B-movie. Clearly a message film, four things made it bearable- Walter Huston, my odd attraction to Qualen Stevens (there will probably be a blog on him soon), the special effects that must have tripped out kids in the 40's, and James Craig's over-acting. Consarnit! And is it just me or is James Craig the rich man's Nat Pendleton?
I'm still up in the air on whether or not I like Edward Arnold. There's something about him that just puts me off, or maybe I still have lingering dislike after seeing him in Come and Get It, featuring another wonderful Walter, Walter Brennan. As for Walter Huston, I'm a goner. Apparently a wonderful character actor (I've only seen him in bit/uncredited parts in The Maltese Falcon and In This Our Life), he is also the father of director John Huston and grandfather to Angelica Huston. I cannot wait to check out his other films. I was attracted mostly to his facial expressions and the soft, lyrical cadence of his voice even as he was speaking of undelightful things. 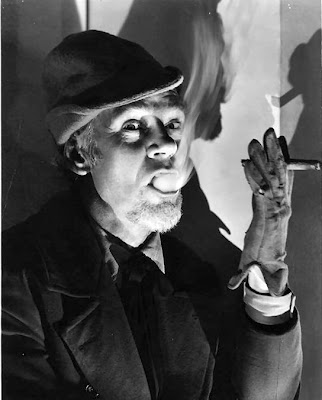 Tonight on TCM!
Summer Under the Stars: Deborah Kerr
Posted by Sarah at 4:52 AM