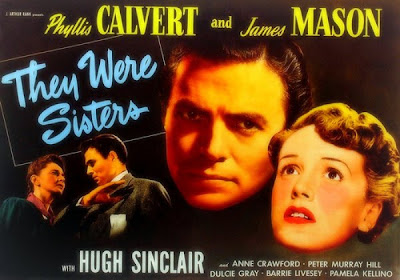 They Were Sisters is a story of three sisters Lucy (Phyllis Calvert), Vera (Ann Crawford), and Charlotte (Dulcie Gray) who marry into three different lifestyles. Lucy and her husband are devoted and support one another in every aspect. They want children, lost the only one they had but after seventeen years they are still in love. Vera's husband is aware that she does not love him, she told him so before they were married. He thought he could change her mind but despite his affection and their daughter, Vera's string of suitors still come around until she finally falls for one of them. Charlotte married Geoffrey (James Mason) impetuously. Thinking he loved her, he was really after her money and a position with her father's business. For seventeen years he has mentally abused her, driven her to drink and eventually causes all three of their children to despise him. This is the marriage the story revolves around.
James Mason plays his part spectacularly. You cannot help but hate him and what he does to the pitiful looking Dulcie Gray. Phyllis Calvert is the other main lead and I find that Elizabeth Shue has a striking resemblance to her. I really enjoyed the movie mainly because Geoffrey is such a despicable husband and father and he eventually gets his comeuppance. 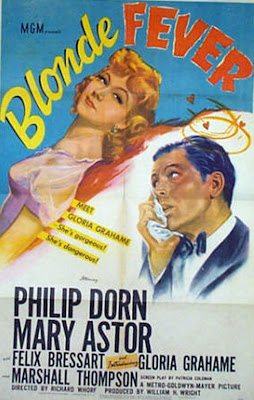 In Blonde Fever restauranteur Peter Donay (Philip Dorn), is happily married to the pleasant but plain Delilah (Mary Astor). Approaching "that certain age", Donay finds himself lusting after a waitress Sally Murfin (Gloria Grahame). Sally, though young, knows how to play games. First she comes off shy and coy but really turns on the charm when Donay wins the $40,000 lottery. Meanwhile, Delilah, with little help from the inexperienced but indignant Freddie (Marshall Thompson), Sally's fiance, plots to ruin any relationship that may come about between her husband and Sally. First she tries to convince Sally that the restaurant is doing poorly, but then Donay wins the lottery. Then she hires Freddie as a waiter and even offers up the apartment over the garage as a place for Freddie and Sally to live once they're married. Neither trick works. So, Delilah concedes to a divorce but she still has one trick up her sleeve- no divorce unless she gets the $40,000. Peter, though upset about it, wants to prove to Delilah that Sally is not marrying him for his money so he gives her the check. That same evening Peter realizes how foolish he is being and how much he loves his wife. How will he rectify the situation? Thankfully he has a smart wife who does it for him.
This movie wasn't awful per se. It ran very quickly and didn't require much thinking, proving to be a perfect escape film on a B level. Imagine, Mary Astor in a B movie! I just took a strong dislike to Gloria Grahame's character. Her baby voice and attempts at being seductive were more annoying than alluring. However, the film plot was clever, proving Delilah not only to be the bigger person but the smarter one of the relationship as well.

Summer Under the Stars: Red Skelton
Posted by Sarah at 5:03 AM