A week of Cary Grant!

I have decided to dedicate this week to one of my favorite actors, Cary Grant. I love him not only because he was asthetically pleasing to the eye and because he conveyed much wit and humor onscreen but also because he exuded a touching vulnerability. No matter how manly, angry, or cocky Cary Grant was onscreen, there is always this need to make sure someone was there to take care of him. I think that's why he did so well with roles where he was a charming but flawed individual that needed a strong woman behind him. Besides that his voice and mannerisms were distinctly his own. In short, there never can be, never will be anyone like Cary Grant.

I would like to take this opportunity to mention and thank Debbie Dunlap who created and keeps up one of the best pages dedicated to a classical actor. The Ultimate Cary Grant Pages are a fantastic resource and extremely educating. It happens to include the autobiography, not in book form, but as a three-part installment in a magazine that Cary Grant wrote himself!! Take a gander! 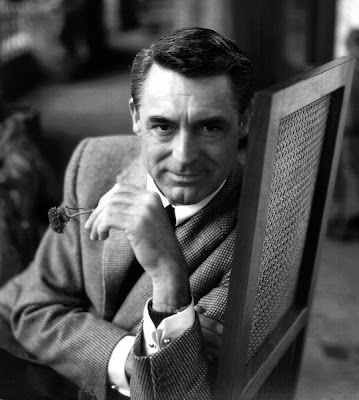 Archibald Alec Leach was born in Horfield, Bristol, England in 1904. He joined the "Bob Pender stage troupe" and travelled with the group to the United States as a stilt walker in 1920 at the age of 16, on a two-year tour of the country. When the troupe returned to England, he decided to stay in the US and continue his stage career.

After some success in light Broadway comedies, he went to Hollywood in 1931, where he acquired the name Cary Lockwood. He chose the name Lockwood after the surname of his character in a recent play called Nikki. He signed with Paramount Pictures, but while studio bosses were impressed with him, they were less than impressed with his adopted stage name. They decided that the name Cary was OK, but Lockwood had to go due to a similarity with another actor's name. Cary chose Grant because the initials C and G had already proved lucky for Clark Gable and Gary Cooper, two of Hollywood's then-biggest movie stars.

Having already appeared as leading man opposite Marlene Dietrich in Blonde Venus (1932), his stardom was given a further boost by Mae West when she chose him for her leading man in two of her most successful films, She Done Him Wrong and I'm No Angel (both 1933). I'm No Angel was a tremendous financial success and, along with She Done Him Wrong, which was nominated for an Academy Award for Best Picture, saved Paramount from bankruptcy. Paramount put Grant in a series of indifferent films until 1936, when he signed with Columbia Pictures. His first major comedy hit was when he was loaned to Hal Roach's studio for the 1937 Topper.

Grant starred in some of the classic screwball comedies, including Bringing Up Baby (1938) with Katharine Hepburn, His Girl Friday (1940) with Rosalind Russell, Arsenic and Old Lace (1944) featuring Priscilla Lane, and Monkey Business (1952) opposite Ginger Rogers and Marilyn Monroe. Under the tutelage of director Leo McCarey, his role in The Awful Truth (1937) with Irene Dunne was the pivotal film in the establishment of Grant's screen persona. These performances solidified his appeal, and The Philadelphia Story (1940), with Hepburn and James Stewart, showcased his best-known screen persona: the charming if sometimes unreliable man, formerly married to an intelligent and strong-willed woman who first divorced him, then realized that he was—with all his faults—irresistible.

Grant was a favorite actor of Alfred Hitchcock, notorious for disliking actors, who said that Grant was "the only actor I ever loved in my whole life". Grant appeared in such Hitchcock classics as Suspicion (1941), Notorious (1946), To Catch a Thief (1955) and North by Northwest (1959).
I learned last night after watching North by Northwest that after Suspicion, Cary Grant swore never to work with Hitchcock again because he was so difficult.

In the mid-1950s, Grant formed his own production company, Grantley Productions, and produced a number of movies distributed by Universal, such as Operation Petticoat (1959), Indiscreet (1958), That Touch of Mink (1962), and Father Goose (1964). He appeared opposite Audrey Hepburn in Charade (1963). His last feature fim was Walk, Don't Run (1966) with Samantha Eggar.

Grant was once considered a maverick as he was the first actor to "go independent," effectively bucking the old studio system, which almost completely controlled what an actor could or could not do. In this way, Grant was able to control every aspect of his career. He decided which movies he was going to appear in, he had personal choice of the directors and his co-stars and at times, even negotiated a share of the gross, something unheard of at the time.

Grant was nominated for two Academy Awards in the 1940s. He was denied the Oscar throughout his active career because he was one of the first actors to be independent of the major studios. Grant received a special Academy Award for Lifetime Achievement in 1970. In 1981, he was accorded the Kennedy Center Honors. -Wikipedia

Email ThisBlogThis!Share to TwitterShare to FacebookShare to Pinterest
Labels: A week of Cary Grant, Grant