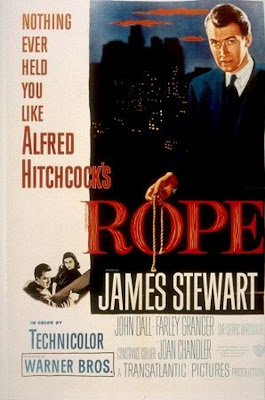 Inspired by a former prep-school housemaster, Brandon Shaw (John Dall) and Phillip Morgan (Farley Granger) murder a former classmate, David Kentley (Dick Hogan) in their apartment. However, Brandon cannot just leave it at that, he must be bold and daring as if he wants to be caught. So, he has arranged for there to be a dinner party directly after the murder. The guest include the victim’s father (Cedric Hardwicke) and aunt (Constance Collier), as well as his fiancée, Janet Walker (Joan Chandler) and her former lover Kenneth Lawrence (Douglas Dick), who was once David's close friend. But he also invites Rupert Cadell (James Stewart), the former headmaster as he feels Rupert is the only one who could appreciate what they have done. Increasing the grotesque challenge, Brandon has the dinner served off the chest containing David’s body, much to their maid Mrs. Wilson’s (Edith Evanson) dismay. 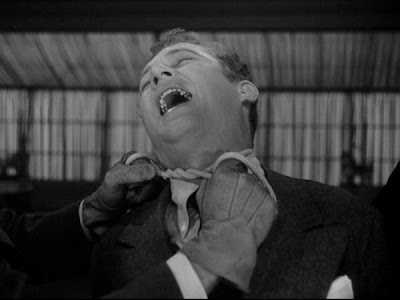 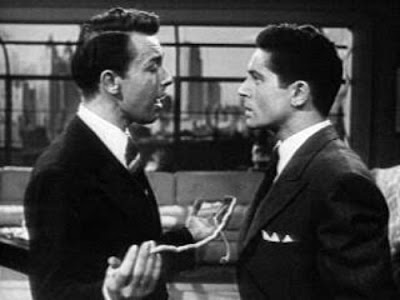 Compared to Brandon’s cool aloofness, Phillip is visibly upset and drinks too much in an attempt to conceal it. He knows how intelligent and suspicious Rupert is. He knows he will be their downfall. When David's aunt, Mrs. Atwater, who fancies herself as a fortune-teller, tells him that his hands will bring him fame, she is talking about his skill at the piano, but Phillip thinks otherwise.
Brandon is only ruffled when he first speaks to Rupert, who comments that he only stammers when he is nervous or excited. Much of the conversation focuses on the absence of David which worries the guests. Most especially Rupert when the conversation turns to the art of murder as a means of showing one’s superiority over another. Brandon keeps driving the point home much to the dismay of David’s father who almost leaves the party. 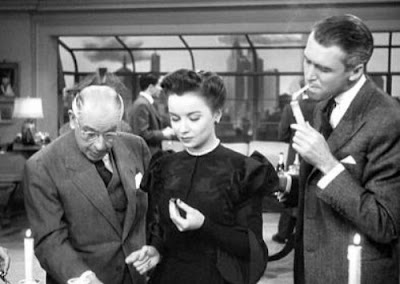 David's fiancée is also disturbed as a meddling Brandon plays matchmaker between Janet and Kenneth. Brandon mistakenly thinks that Janet threw Kenneth over for his best friend David when it was Kenneth who broke it off with Janet.
David’s father decides to leave when his wife calls, overwrought because she has not heard a word from David herself. He takes with him some books Brandon has given him, tied together with the very rope Brandon and Phillip used to strangle his son. The other guests decide to leave as well. That’s when Rupert is handed the wrong hat, and notices the monogram "D.K." (as in David Kentley) inside it. 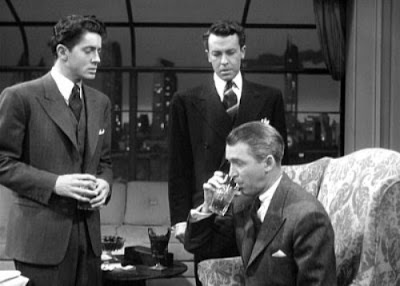 Now certain something is wrong, Rupert returns to the apartment a short while after everyone else has departed, pretending that he has absentmindedly left his cigarette case behind. After “finding” his case, having a drink and then struggling to take a handgun from Phillip, Rupert lifts the lid of the chest and finds David inside. He is horrified, but also deeply ashamed since it was his own rhetoric which led them to carry out an actual killing as an intellectual exercise. Rupert fires several shots into the night in order to attract the police and the scene closes on Brandon taking his last drink as Phillip sadly plays the piano. 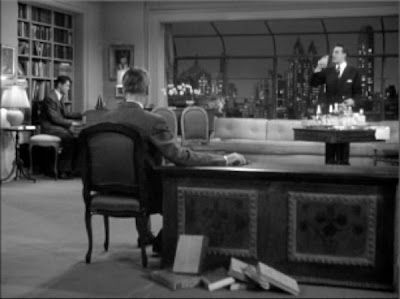 A very good Hitchcock film. I could have done with another actor playing Brandon as I am not a fan of John Dall but he played a smarmy jerk well. I love the reference to Cary Grant who was actually the first pick for the part of Rupert Cadell. There was also a reference to actor James Mason and how well he would play a villain in a film, which he eventually did in North by Northwest.