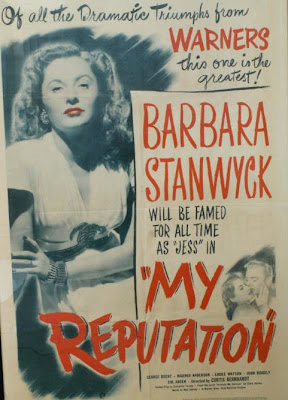 My Reputation was a real tear-jerker. There were two scenes so well performed by Barbara Stanwyk, I have to consider putting her on my favorite actresses list, at least up to the 1940's. Jessica Drummond was a woman content with her safe life until her husband passed away leaving her with two tweener boys who are soon off to boarding school, an overbearing mother (Lucile Watson is about the same here as she was in The Women), and good friend and some really crappy friends. She finally breaks after too many lonely meals and a couple of unwanted advances from her friend's husband. When she confesses to her good friend how hard it is to be home alone, the emotion is palpable, it's no hard task to put yourself in her shoes and grieve with her. And then again, when she has to explain to her sons that she hasn't forgotten their father by finding new love, I found I was on the edge of my seat hoping they understood that she needed this new man in her life. That new man is Major Landis (George Brent) who plays a bit of an jerk at first- apparently grabbing women and smashing your face into theirs is a popular form of passion in the 1940's. If she likes it, all the better, if not, time to put on the asshat show. Very good movie. 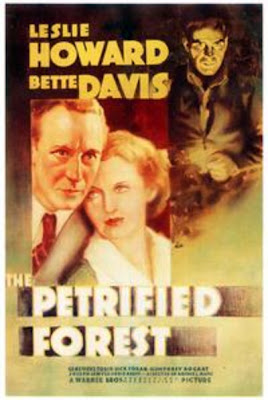 Simply put, The Petrified Forest was poorly written for screen adaptation. I felt like I was sitting in an uncomfortable seat in a theatre somewhere watching this unfold on stage. Though Alan Squier (Leslie Howard) delivers his lines well, you can't help but wonder why Duke Mantee (Humphrey Bogart) or his goonies don't make him shut him up. They're in an Arizona desert for corn's sake! Duke Mantee is on the verge of being caught and killed for his crimes. He simply wants time to rest, think, and plan but here is Alan Squier waxing romantic, wanting Duke Mantee to kill him so he can give over his life insurance to a girl he met hours ago. Why? Because he thinks she has potential. Gabrielle Maple (Bette Davis- quite possibly in one of her worst performances) doesn't have potential. All she has is a desire to leave the Arizona desert and reunite in France with her mother and maybe paint, maybe carry on a few love affairs. So, why martyr yourself, Alan? The best performance was given by Humphrey Bogart who managed to look quite desperate and put out about the deal he reluctantly makes with Leslie Howard. Despite some really poetic lines about life and love, the movie was hokey and boring to watch. I did not enjoy it at all.