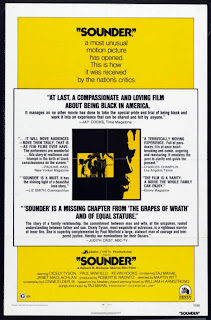 Humble and hardworking, the Morgan family, limps through the Depression as sharecroppers in Louisiana for storeowner Mr. Perkins (Ted Airhart). Barely able to survive on the meager earnings Perkins doles out, Nathan Lee depends upon his dog Sounder to help him hunt raccoon. One night, after the hunting is bad and seeing that his children who, along with his wife Rebecca (Cicely Tyson) toil endlessly during the day, Nathan Lee (Paul Winfield), steals ham from a neighbor's smokehouse. When Rebecca asks about the meat, he responds, "I did what I had to do."


David Lee (Kevin Hooks) their oldest son attends school six miles away. He and a few other black children are allowed to attend and sit in the back. His willingness to take the long trek and still do his chores proves to his father that David Lee is very bright and interested in learning. Mrs. Rita Boatwright (Carmen Mathews) a sympathetic white woman who has her laundry done by Rebecca, also sees that Davis Lee is a bright boy. She lends David her copy of The Three Musketeers and tells him they will discuss it when he has finished reading it. 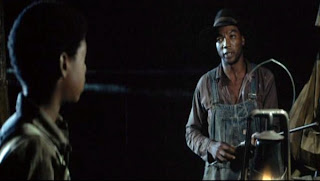 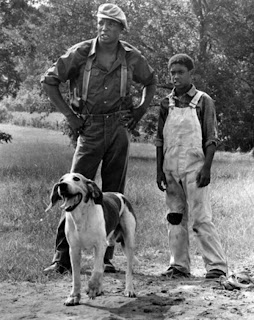 After David Lee and his brother and sister, Earl and Josie Mae (Eric Hooks and Yvonne Jarrell) drop off Mrs. Boatwright’s laundry, they rush to see their father pitch a winning game of baseball. Nathan Lee is quite good and the opportunity missed is notable. They happily walk home to find Sheriff Charlie Young (James Best) and his deputy waiting to arrest Nathan Lee for the theft. As they haul him off, Rebecca reminds the sheriff that he has known Nathan Lee a long time and should please consider the difficulties they have been having as of late. When Sounder follows the truck, the deputy cruelly shoots him. He limps off into the woods as David Lee but he doesn’t find him. When Rebecca takes the long, hot walk into town to visit Nathan, she is informed that colored women are not allowed to visit their husbands and is turned away. She then goes to Mr. Perkins store to trade walnuts for ingredients to bake Nathan Lee a cake. Perkins complains to Rebecca that Nathan has made him look bad, claiming he has been good to her family, and demands to know who will do the sharecropping if Nathan is in jail. Rebecca tightly answers that she and her family will do what needs to get done. At the trial, Nathan Lee is sentenced to a year of hard labor at a prison camp. Rebecca bakes the cake and has David Lee bring it to the jail since he can visit his father. Nathan Lee does not know which camp he is being sent to, he asks David Lee not to visit him at the jail again. In Nathan Lee’s absence, the family works day and night to support themselves. At night, David reads The Three Musketeers to them, and on the weekends they attend church. One night, Sounder returns and David ministers to his wounds. When the sheriff refused to let Rebecca know which labor camp her husband has been sent to, David asks Mrs. Boatwright to find out. But the sheriff refuses to give her the information and abruptly leaves the office on an errand. Ms. Boatwright then spies at Nathan Lee’s file. The sheriff catches her in the act and threatens to ruin her good name should she reveal what she knows. David Lee, who has witnessed the whole transaction, is disappointed when Ms. Boatwright tells him she did not get the location. 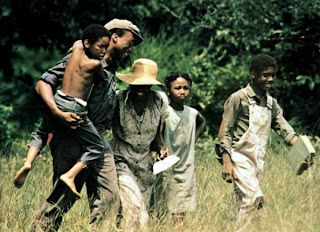 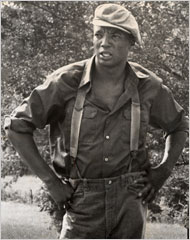 Soon after, however, Mrs. Boatwright arrives at the house and announces the location of the labor camp. She teaches the family to read a map and points out the location of the camp. Rebecca then sends David Lee off with Sounder to find his father. Over many days, he travels on foot through rain and sunshine, finally reaching the camp. However, no one has heard of his father and when he tries questioning an inmate, the foreman hits his hand and chases him away. David then walks to a nearby schoolhouse, and is stunned to see that all the students inside are black as well as the teacher. He walks inside and asks for aid for his cut hand. The teacher, Camille Johnson (Janet MacLachlan) tends to his hand, and learns of why he is in the area. Seeing his interest in the school, invites him to her home for a hot meal. David Lee loves Camille’s home, it’s full of pretty things and lots of books. Camille tells him about notable blacks in history and quotes intellectuals such as W. E. B. Dubois. The next morning David attends her class and one of the students tells a story of rescuing his sister from drowning. The other students challenge his story, knowing that he cannot swim. However, David Lee defends the boy, stating that people can do impossible things when challenged, he tells them of the toil his family has been through while surviving without their father. 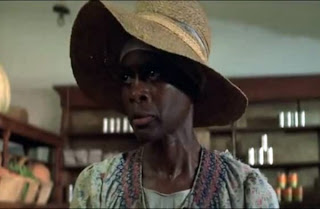 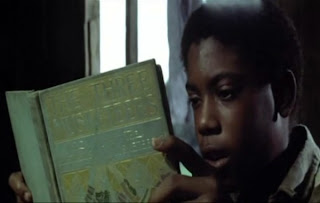 Days later, David Lee returns home much to his mother’s relief. He brings books that Camille gave him and the news that he was not able to find Nathan Lee. He also tells his mother of Camille and how she would like him to attend school that Fall. Rebecca states that if his father is home by that time, they will definitely consider it. In the meantime, they reap the sugar cane they sowed for Mr. Perkins and are given their measly share. Then one afternoon as Rebecca is sewing, Sounder suddenly barks and runs off down the road toward an unknown figure. Realizing it’s Nathan Lee, Rebecca and the children run joyously to meet him. Nathan Lee explains that his leg was injured in a dynamite blast and since he could not work, they released him early.  Very relieved that his father is home, David Lee is reluctant to read aloud the letter that arrives the next day from Camille. She is hoping he will be able to attend school, which starts in a week. However, Nathan Lee is very excited for his son, he’s even willing to go on credit at Perkins store to make sure he’s properly prepared. But David Lee refuses to go. It isn’t until his father convinces him that when he was wounded, he made up his mind to beat death, he would do the same with his leg, so David Lee need not worry. More importantly, he wants David Lee to strive for opportunities denied him, believing her has the ability to achieve major goals. 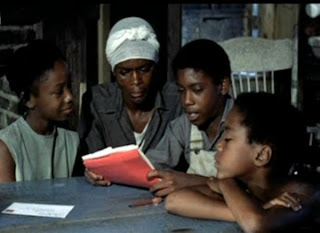 A deeply moving and poignant film, the Morgan family is the definitive composite of the African American family that struggled and would continue to struggle well out of the Depression era. Kudos to Winfield, Tyson, and especially Hooks who infused their characters with humility, depth, and strength that will touch the heart of anyone who watches this film. Definitely a must see. Don't forget your tissues!