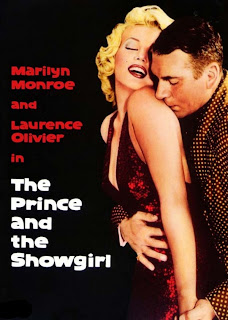 Based on Terence Rattigan's play The Sleeping Prince, the story takes place in London in 1911 during the coronation of King George V. Grandduke Charles, the Rrince-Regent of Carpatha (Laurence Olivier) has arrived for the ceremonies with his son King Nicholas (Jeremy Spenser) and mother-in-law the Queen Dowager (Sybil Thorndike). Quite the playboy, Charles sets his sights on Elsie (Marilyn Monroe) a showgirl currently performing at the Coconut Club and depends upon Northbrook (Richard Wattis), his attaché from the British Foreign Office, to arrange a private dinner for them. Though Elsie is excited to be invited to what she thinks is a formal dinner, she puts her foot down when she realizes the dinner will be on a more tête-à-tête basis. Having dealt with this kind of issue before, she makes an agreement with Northbrook, who is nervous about displeasing The Regent, that she will stay for a short time before he will break into the dinner with an “emergency”. What Elsie didn’t count on was the vodka and champagne combination. After initially being ignored by Charles, who is a stickler for protocol and has business to attend to, he returns his attention to Elsie who has gotten quite tipsy. Trying his best romantic maneuvers, Elsie laughs him off, calling his game quite dull. Enraged, he sets about getting a car ready to take her home but when she leaves the room to get her wrap, he amps up the romantic atmosphere and Elsie (quite literally) falls for him. Slightly disgusted she has passed out from the vodka consumption, Elsie is put into a guest room and Charles goes to bed. The next day he is upset to find Elsie, who is now madly in love with him, still there. Through a series of events, she manages to stay with him the entire day, getting to attend the coronation and the ball afterwards. In that time Elsie manages to find out the true relationship between father and son, brook the gap between them and made the stuffiest of Regents fall in love with her.


I don’t think it needs repeating that this was a strange pairing of actors. Monroe, who now had her own production company and enough star power to choose who she wanted to work with, was interested in becoming a more serious actor. Teaming up with Olivier, Britain’s premiere Shakespearean and otherwise actor was definitely aiming for the apex. Though her part in The Prince and the Showgirl wasn’t quite dramatic, she certainly didn’t play an airhead either. Managing to disconcert The Regent in a most innocent way, the viewer can’t but wonder if she’s hiding some real intelligence behind those wide eyes of her. In the end, she has everyone eating out of her hand- a simple showgirl prone to wardrobe malfunctions. Though Olivier played the part of the stuffy regent to perfection and Thorndike was a delight as the hard-of-hearing Dowager, I was most impressed with Monroe’s performance. This was another scenario where her behavior on set was quite deplorable (something that My Week with Marilyn will apparently go into more detail about- Kenneth Branagh is to play Olivier- swoon!). Despite that and the struggles she had with Olivier who was directing the film and who had no tolerance for any of her nonsense, he got a very fine performance out of her. Looking at the movie, you wouldn’t know she was seriously intimidated by Olivier, so much so, she often wouldn’t arrive on set for days, once even leaving the elderly Thorndike waiting for hours in costume for her arrival.


Tonight on TCM!
Go treasure hunting!
Posted by Sarah at 4:00 AM

Email ThisBlogThis!Share to TwitterShare to FacebookShare to Pinterest
Labels: 50's, Monroe, Olivier, Spenser, The Prince and the Showgirl, Thorndike, Wattis