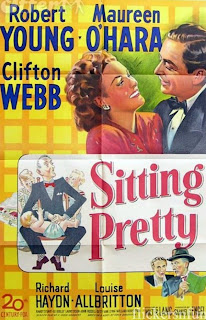 Harry and Tacey King (Robert Young and Maureen O’Hara) have a pleasant life on Hummingbird Hill despite their nosy neighbors The Appletons (Richard Haydn and Grayce Hampton). When the King’s maid quits because she can no longer stand their three unruly sons Larry, Tony and Roddy, Tasey puts out an advertisement for a resident nanny. Lynn Belvedere (Clifton Webb), who has an impressive list of qualifications, promptly responds and is hired sight unseen.
Assuming Lynn is a woman, the Kings are shocked and a bit reluctant to welcome the gentleman who claims to be a genius who has mastered many professions. However, they are impressed when within a day Mr. Belvedere has won over and tamed the children and the King’s unruly dog. He also found time to fix the icebox.

Once Belvedere establishes himself on Hummingbird Hill, Appleton and his mother set their curious sights on him. Things take a turn for the worse when Harry must go on a business trip but does not want to leave Tasey alone in the house with Belvedere. Though she thinks it silly, Tasey arranges to sleep at their neighbor Bill and Edna Philby’s (Louise Allbritton and John Russell) house. This arrangement works well until one night Tony wakes up with stomachache and wants his mother. While she is there Appleton drops by feigning concern when he saw all the lights on in the house. Really, he’s hoping to catch some gossip and Tasey and Belvedere don’t disappoint- both are in their robes and Belvedere is guzzling water from the gin bottle that’s being used since the King’s water bottle is broken.

By the time Harry returns home, his boss Hammond (Ed Begley) has heard the news being spread around town and warns Harry to fix the situation or lose his job as one of his lawyers. Though Harry accepts Tacey's explanation, he thinks Belvedere should leave to avoid further complications. But the boys protest and Belvedere stays. Things flare up again however, when after attending a lecture Tacey and Edna stop at the hotel restaurant for a meal. Mr. Belvedere is there with one of Hammond’s secretaries, Peggy (Randy Stuart), who has brought him some papers. Mr. Belvedere invites Tacey to rumba and is spotted by Appleton and his mother. The gossip results in Hammond giving Harry another lecture and Harry and Tacey getting into a fight. Tacey leaves with Roddy to stay at her parents. Both are too stubborn to apologize and it isn’t until the publication of Belvedere’s book Hummingbird Hill, which results in both Harry and Bill getting fired from the firm, that Tacey rushes home. Hummingbird Hill contains thinly disguised portraits of the townspeople in a bad light including Appleton and Hammond. Everyone is in an uproar.

When Hammond, Appleton and a few other neighbors threaten to sue, Belvedere is delighted knowing this will help the sales of his book. He requests that Harry and Bill represent him and when Hammond demands to know the source of his information, Belvedere identifies Appleton who promptly retreats. Later, Harry and Tacey are surprised to find that Belvedere will stay on and perform his duties. Belvedere predicts he could get another two volumes to complete his trilogy if he stays on. Tacey warns him that she is expecting another child, however Mr. Belvedere is unfazed. He states he has also been an expert obstetrician as he takes out his knitting needles and continues to work on the baby sweater he’s making. .


What do you get when you plop a strictly refined, sardonic, narcissistic man into middle-class suburbia? Pure genius. That’s why Webb’s Belvedere not only won him an Oscar nomination for Best Actor but also spawned two more movies based on the same character. Basically playing himself onscreen, Webb with subtle actions and razor sharp dialogue is wickedly funny. Watching him go head to head with Appleton is a treat. I would definitely like to see the sequels!

Some of you may recall I did a small piece on Sitting Pretty before... :)
Posted by Sarah at 7:31 AM