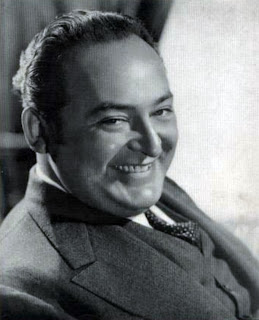 I PREFER THE SCREEN TO THE STAGE
By Edward Arnold
[Reprinted from The Screen Guilds’ Magazine 1935]
One great reason why I prefer picture work better than the stage is that after thirty years of trouping, I can live in my own home.
The house we have now in is the first real home I’ve ever had. For thirty years I moved from hotel to hotel, from town to town—the uncertain, hazardous life of a trouper.
Cooking is one of my hobbies, and I can remember trying to prepare dinners over a single gas flame in those days—inviting other members of the company to eat with us, to give them a touch of home.
Bringing up my children properly, worried me too, because I realized how important security is to growing children how they need to feel that some definite place in the world is theirs.
I’ve always been a family man at heart. With my wife and youngsters—that’s where my chief interests are. We’re a close little family circle, sufficient unto ourselves. And has given us our first chance to be together, as a real family should be.
My daughter acts as my secretary and answers my fan mail. My son is now beginning on a career of his own in pictures, and I believe he will have success. I enjoy the Sundays we spend together—days when I indulge in my hobby and prepare the meal, whether it’s the cook’s day out or not.
I can spend nights at home now, too. has given me that. I usually quit work around six, and I have my evenings to myself. And when I go for a trip with Mrs. Arnold, it’s a real vacation—not just another tour.
So far as the mechanics of acting are concerned, I like the screen better too. I’ve never changed my methods of acting for pictures. Some of the things other stage actors complain about in picture work have never bothered me. The business of breaking up a dramatic part into several scenes, for instance. I like it. You have a chance to do a scene over if you’re not so good the first time. On the stage if you pull a bloomer, it remains just that, beyond hope of recall!
Also, I like knowing that my work reaches millions of people. On the stage you can only hope to be known by those who live in or near large cities. I’m proud and pleased to know that I have fans all over the world. I get a kick out of watching my kids bask in my reflected glory—stangers speaking to me when we are out in public, people asking for my autograph.
On my recent trip to , I was really astonished at the number of invitations Mrs. Arnold and I received—at the hundreds of people who wanted to show us a good time. It brought home to me literally how many fans a star has, and how much pleasure he brings to millions of people.
When I returned home, my children had a home-made “Welcome” banner hung across the front door. Mrs. Arnold’s birthday had occurred while we were away, and they chose the night we returned to celebrate. They had prepared a birthday cake for her, turkey and champagne… Is it any wonder I prefer motion pictures, when had brought me all this?
Then there’s the money. Perhaps I should write that in italics. For the first time I can do the things I want. For the first time I can have the home I’ve always dreamed about. I am providing for my family’s security for the future. And I feel that in pictures I have a future, myself. I want nothing more.
I have said on here before that I am unsure as to whether I like Edward Arnold. I know that a lot of hesitation stems from the fact that he has played some pretty mean and petty characters. However, that being said, I should just give over and recognize that he was not only a good character actor, but a damned convincing one too! Debuting on stage in 1907, Arnold was, as his article states, just as much a stage performer as a screen star. He made his screen debut in 1916, participated in several films, mainly shorts, until the 20's which he spent dedicated to the stage. Reappearing onscreen again in 1932, Arnold had no trouble adjusting to talkies and and remained in front of the camera for another 22 years. However, he never gave up the stage and participated in plays right up to his death.
Posted by Sarah at 5:08 AM

Email ThisBlogThis!Share to TwitterShare to FacebookShare to Pinterest
Labels: Arnold, Tuesdays with The Screen Guild Magazine