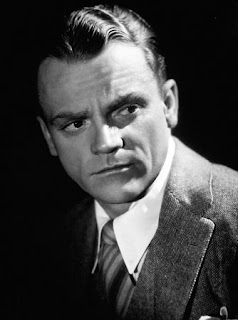 THE HAM INSTICT
By James Cagney
[Reprinted from The Screen Player, 1934]

Among my close friends I may count a number of people whom I call “Dicussos,” the reason being that they will discuss anything, under any condition, and love it. It doesn’t matter where they are or who is present. They will wade into a gab-fest without regard for any consideration but the subject at hand. Talk, talk, talk, talk, talk—gab, gab, gab, gab, gab. Frank McHugh, Pat O’Brien and Ivan Simpson are all terrific. They will “kick it around” with anybody, and make history in the kicking.


Recently we beat each other’s ears back in a verbal set-to on, of all subjects, acting! It has always been an opinion of mine that whether acting be good, bad, or indifferent, is all a matter of individual tastes; because the Discussos, in a body, accused me of side-stepping an issue and avoiding giving a positive statement of viewpoint. You see, all they were looking for was an argument—always the mark of an incurable Discusso.

Then we got on actors; and “on” is what I mean. Why are actors? What makes them? Where does the endless supply of bodies come from each year? And again why? We pushed that around gleefully; and then the answer seemed to present itself—that is, the universality of the ham instinct. They all agreed that most humans have some tendencies toward exhibitionism and when those tendencies are developed in the individual to such an extent that he can think of nothing but strutting his stuff before an audience, you have the true Westphalian, Swift, Armour, or any other name you may care to apply to us.

However, we were not greatly concerned with our own particular group. We all knew what we were about—well, to some extent anyway. We didn’t go into that, because we didn’t want to get too close to ourselves. We tried to avoid unpleasantness as much as possible.

The ones who held our interest unfailingly, we found, were those who entertain the conviction that they can act like Hell and yet never seem to do anything about it. And believe me, their numbers are legion. In this group may be found all kinds of actors, some professional, some amateur, and some who never attempt to put a foot on the stage. The latter are the parlor entertainers and street-corner comics. You may have met a few. The pro contingent may be said to embrace the hey-hey boys or good-time Charlies who go into the acting business because it promises glory and approbation of a kind, looks easy, and there is fun to be had. Some of these have genuine ability and achieve great success; but all through their careers they make their jobs incidental to their pleasures and have a perfectly grand time. They never make any attempt to improve their gifts, but still do very nicely with whatever native equipment they have. However, they are another story, and an interesting one.

It’s the others, the boys and girls who work only now and then, or have a part-time job in some other field, or no job at all, who interest us most. It appears that at some time or another, each said to himself: “I am an actor,” heaved a sigh of satisfaction, and then proceeded to await fame’s embraces. All of us, at the beginning, started in almost the same way, but there was a difference. We would tackle anything. Nothing daunted us. Hamlet? A pushover. What can you do? Anything. And we would do just that—anything!

As for me, I tremble when I think of it; because I know I left a stench in many a fair theatre, and I have an idea that some of them may still be there—they were that bad. But at least we tried. The youngsters we had in mind seemed to be lacking in initiative; and that is one thing a person must have to succeed in any measure in this acting racket—a strong, driving ego that permits of no let-down. An actor without it, whatever his talents may be, is generally doomed to mediocrity. I say “generally” because of the exceptions typified by the good-time Charlies mentioned above. But they are sports and must be considered as such. I use “sports” in a biological sense.

It may be that today there is a different breed of youngster coming into the business, and I think there is some basis for such an assumption. The colleges are turning out thousands of young men and women annually, with no place to go in a business way, and to the uninitiated the theatre and pictures present a pretty fair opportunity for anybody who fancies that he resembles in no small way a certain glamorous figure in the entertainment world. A slight resemblance to Garbo, Hepburn, or Barthelmess has put more than a few young hopefuls on the train bound for Hollywood. Incidentally, I have heard that those who are supposed to resemble me, all hitch-hiked. It seems to be a matter of type. Mind you, they all are all sure they can turn the trick without any trouble.

George Kelly, the playwright, found the type so amusing that he once wrote a sketch called “The Flattering Word” and played it successfully for years. In it he “threw the swell” into a cleric, by insisting that he (the cleric) looked and deported himself as did Edwin Booth in his best moments. And then he sat back and waited for the ham to come to the fore—and it did, decidedly.

G. K. maintains that one might throw a handful of rice on any crowded street corner, and every kernel would hit at least one who needed only a whiff of grease paint and a push to bring out the Hormel.

I seem to be wandering a bit. There are so many phases to the situation that I am rather hard put [to it] to stay with the main idea. However, my aim in the beginning was just to point out the fact that experienced actors find great interest in the doings of the novices. So much so that I expect any day to hear that blood has been shed in the defense of a youngster’s rights to take up time and money and the energy of other actors, after he has represented himself falsely as an experienced player of parts. I mention this last just to start another argument. Some one of the Dicussos will be bound to read all or part of this, and it will start all over again. If that happens, I will not have desecrated these pages in vain.


James Cagney started out in the business as a "hoofer" and worked himself right off the stage onto the screen with notable gangster roles in such movies as The Public Enemy, Angel with Dirty Faces, and White Heat. Though he had a very particular delivery of speech and mannerism that limited his range as an actor, he didn't let that limit him from fighting for various types of roles, succeeding at most (check him out in A Midsummer's Night Dream). Possessed of a wonderful sense of comedic timing, a passion for dance that made his moves seem effortless, and a sure-fire cockiness with a brain to back it up, Cagney was a very distinct individual indeed.

The Beast of the City (1932) A police captain leads the fight against a vicious gangland chief.
Cast: Walter Huston, Jean Harlow, Wallace Ford. Dir: Charles Brabin.
Posted by Sarah at 7:26 AM

Email ThisBlogThis!Share to TwitterShare to FacebookShare to Pinterest
Labels: Tuesdays with The Screen Guild Magazine