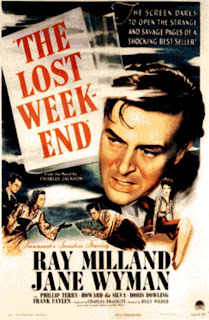 Long time alcoholic, Don Birnam (Ray Milland) is about to experience the worst weekend of his life. Evading a long weekend trip to the country with his brother Wick (Phillip Terry) and ignoring his girlfriend Helen's (Jane Wyman) obvious concern, Don manages to have a weekend alone after ten torturous days of sobriety.
Don is a writer with a monkey on his back. Not confident enough to get a decent story down on paper, he turns to the bottle for comfort. In a series of flashbacks, he tells his local bartender Nat (Howard Da Silva), about his life with Helen and supporting brother Wick, a story he desperately wants to get written. We see Don for the coward he is, how his problem has affected the people around him and his own reputation. Stealing the ten dollars meant for the maid, he goes on a drunken spree hitting rock bottom by Saturday morning when he has neither booze nor any money to buy it. Determined to sell the one thing he needs most, his typewriter, Don is more than upset when he realizes all the pawn shops in town are closed due to a religious holiday. Turning to fellow barfly, Gloria (Doris Dowling), who has a major crush on Don and was stood up the night before by him, he at first receives a cold reception until he kisses her and begs her for five dollars. After getting the money, Don loses his balance on her apartment stars and takes a major fall. When he regains consciousness, he is in the alcohol ward due to his blood alcohol level being severely high.
Barely managing to escape the ward that refuses to discharge him until he gives his address, Don waits for the liquor store to open and robs it of a bottle of rye. When he finally makes it home he begins to experience what Bim (Frank Faylen) the hospital nurse called the DTs. Don perceives there is a mouse escaping from his wall only to be bloodily murdered by a bat. Hearing his screams, Helen, who has been periodically checking in on him to no avail, has the apartment broken into. There she sees the mess Don has made tearing the place apartment looking for liquor. She gets him cleaned up and to bed. The next morning she wakes up to find Don stealing her fur coat. When she runs into him outside the pawn shop they have a confrontation where Helen admits she is finally done with him.. When she asks the pawnbroker how much he got for the coat, he tells her Don exchanged it for a gun. Helen rushes back to Don's apartment for one final showdown. 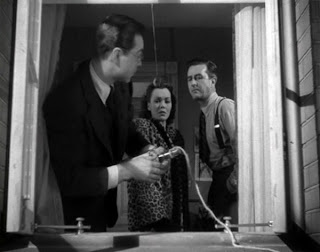 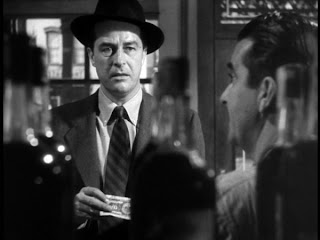 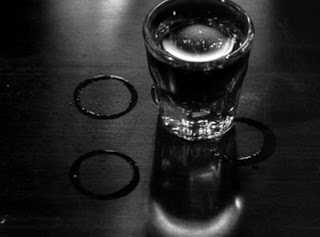 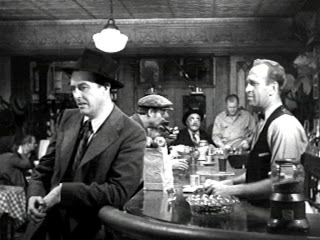 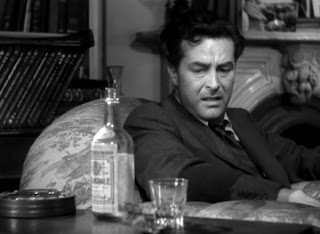 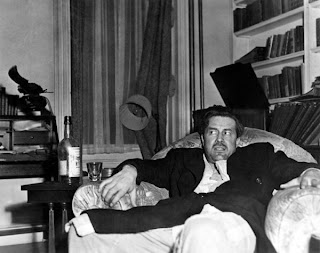 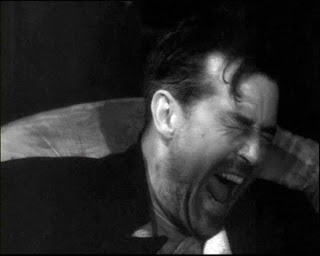 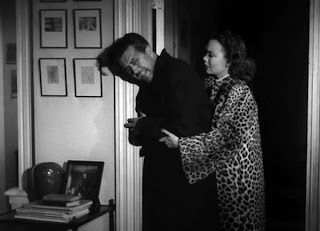 An intensely realistic portrait of a man literally drowning in his own shortcomings, Milland plays his part superbly! Though a depressing film, it really does display the depth Milland was capable of despite most thinking he wouldn't be able to carry such a heavy role.
Ray Milland garned his first and only Academy Award win for Best Actor for his role in The Lost Weekend. He's on record for giving the shortest Oscar speech- having forgotten it completely, he simply accepted his Oscar, bowed to the audience, and left the stage. Bob Hope, the host of the ceremonies quipped, "I'm surprised they just handed Ray Milland the Oscar, I thought they would hide it in the chandelier." A direct reference to the film.
Jane Wyman won her first and only Academy Award for Best Actress for her role in Johnny Belinda. She too was breif when it came to her acceptance speech saying, “I accept this very gratefully for keeping my mouth shut for once. I think I'll do it again.”
Director Billy Wilder had eight nominations for an Academy Award for Best Director in his career. This makes him the second most nominated director in the history of the Academy Awards, behind William Wyler. Out of these nominations, Wilder won twice for the films The Lost Weekend and The Apartment.
Posted by Sarah at 12:32 PM