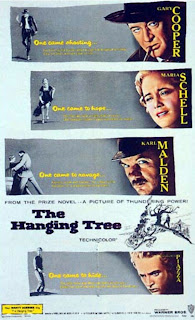 When Dr. Frail (Gary Cooper) drifts into Skull Creek, Montana during the gold rush planning to settle in and make some money he immediately runs into sluice thief, Rune (Ben Piazza) who has been shot. After fixing him up, Frail informs Rune that he can repay him by doing chores around the house and going into town to scrounge up customers. Rune, defiant by nature doesn’t take kindly to this or Frail’s threat that he will expose him as a thief if he doesn’t obey. 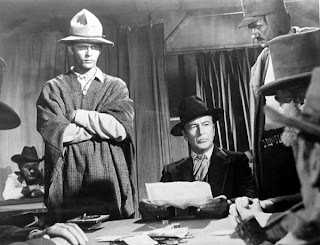 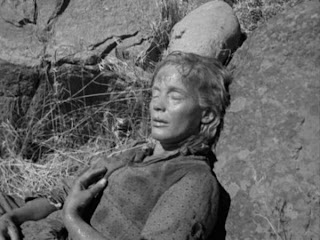 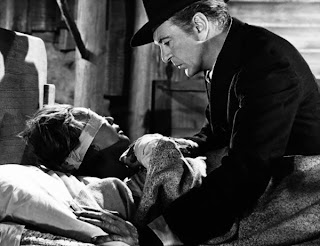 Rune soon learns that Frail is a contrary man who displays both compassion and vengeance as he sees fit. Frail is a man with a past and it effects those who try to get close to him.

One day a stagecoach containing Sweden-born Elizabeth Mahler (Maria Schell) and her father are robbed. Elizabeth’s father is killed and the horses, spooked by the gunfire cause the coach to go flying off a cliff with Elizabeth stuck inside. After a two day search, she is found by one of the town’s scoundrels Frenchy (Karl Malden) and taken into Dr. Frail’s care.
He arranges for her to be transported to storekeeper Flaunce's  (Karl Swenson) abandoned cabin, which is situated across from his own- something Flaunce’s wife and the town womenfolk frown upon. Rune volunteers to help care for her and three days later, Elizabeth, who has been badly burned by the sun and is temporarily blind, regains consciousness. 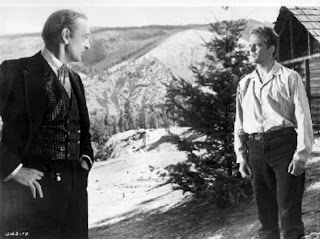 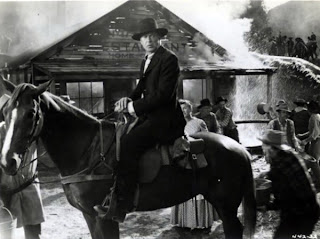 During her confinement, she gets to know Frail better and eventually falls in love with the man she cannot see. Her love is intensified once she is cured. Frail, preferring to keep people at a distance, insists that she should go back to Sweden. Elizabeth refuses and instead gets a grubstake from Flaunce for a broach that’s actually worthless. Frail secretly takes on the grubstake thus allowing Elizabeth and Rune to go in on a gold mining project with Frenchy who owns a plot. Though Elizabeth has had a run in with Frenchy before, something that caused Frail to threaten him if he ever came near her again, she is determined to make her own way even if it means playing with fire.
Things come to a head when Ms. Flaunce (Virginia Gregg) discovers the truth behind the grubstake, Frenchy’s advances become downright nasty, and the gold mining plot turns out to be…well, a goldmine. 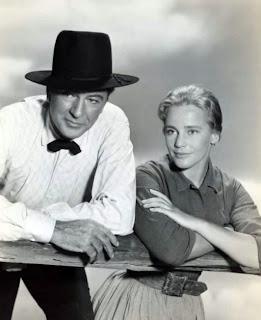 The Hanging Tree﻿ was an interesting film. If anything it showed how far Cooper and movie-making, with most of the studio system defunct at this point, had come. Maybe it's just because I saw Cooper recently in Wings and so I can see a marked difference. Anyhow, Cooper plays his part with ease. Frail is a man with secrets and emotions he'd prefer to tame but you see in small gestures and random acts of kindness. It makes it all that much harder when Rune, played by what I consider to be the typical younger character actor represented in the 50's (this is not a compliment), angrily calls Frail out on things he should obviously be noting himself. That and bad acting usually takes something away from the film but then, besides Cooper, you have Schell's Elizabeth and Malden's Frenchy, who is a particularly sleazy bastard. Both effect Frail by bringing out the best and worst in him. Elizabeth with her innocence and willingness to love and Frenchy who is selfish, lazy and corruptible. Also note that a young George C. Scott graces the screen in a small but no less powerful role as Frails nemesis Dr. George Grubb.
Oscar trivia:
Gary Cooper received five Academy Award nominations for Best Actor, winning twice for Sergeant York and High Noon. He also received an Honorary Award in 1961 from the Academy which was accepted by his friend Jimmy Stewart.
George C. Scott holds the distinction for being the first person to ever return an Academy Award which he did so after he won the Best Actor nomination for Patton. Scott was also nominated for Best Supporting actor for his role in Anatomy of a Murder.
Karl Malden received and won the Academy Award for Best Supporting Actor for his role in A Streetcar Named Desire and was nominated only once more for Best Supporting Actor for his role in On the Waterfront.
Posted by Sarah at 1:20 PM