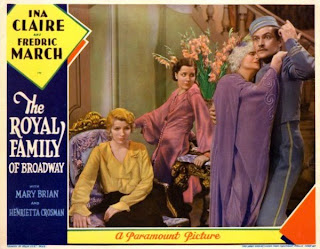 Julie Cavendish (Ina Claire) comes from a family of great Broadway actors who have been on stage for centuries. Her mother Fanny (Henrietta Crosman) continues to act, her daughter Gwen (Mary Brian) is just starting out, and her over zealous brother Tony (Fredric March) has practically disgraced the Cavendish name by leaving the stage and going Hollywood.
Tony breezes into town to flee a breach of promise suit as well as charges for punching his director just as Julie is considering retirement. She wants to get married and start living a normal life. However, her daughter’s sudden determination to go domestic and quit the stage and the reemergence of Gilmore Marshal (Frank Conroy), Julie’s past love, is punctuated by her mother’s admittance that being on stage is the only thing that has kept her going since her husband passed and the warning from her manager that her life would be miserable without the theater. 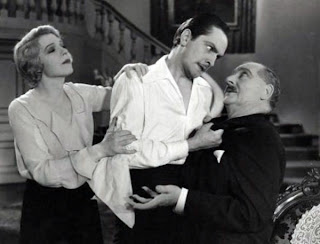 Come next season and Julie is getting prepared to marry Gilmore and head to South America, Gwen has married her stockbroker but is considering going on stage while he is away on a long business trip and Tony is back in town with a new play he’s bought. When they all come together, Julie realizes that she is meant only for the stage. This is further proven when they are all called back stage to Fanny’s latest play. Having collapsed during acts and determined to finish the play- Fanny’s only worry is that a Cavendish will have to close a play early. She is appeased and dies peacefully when Julie says that she will take her place. Julie then says goodbye to Gil and readies herself to finish the play for her mother. 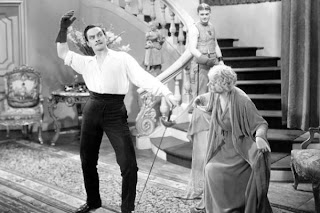 The Royal Family of Broadway is the clever and truly polished satire of the Barrymore acting dynasty and, without a doubt, my new favorite Fredric March movie. His impersonation of John Barrymore is hilariously spot on and rightly garnered him his first Oscar nomination! The famous Barrymore hunch, the stroking of the chin while deeply pondering, the twisting flair of the hands and waggling of the eyebrows accompany a voice that might as well be Barrymore’s own. I was extremely impressed with March’s energy; he explodes on the screen. You’d expect the other players to fall flat in comparison however I was equally impressed with them all, especially Ina Claire. Her show of independence and strength with her underlying wistfulness for a different kind of life was played with such natural ease and grace that one simply must comment on it. 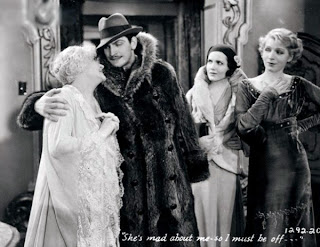 March first played Tony Cavendish in the stage version called The Royal Family. He did it so well that the Paramount executives offered him a five year contract thus beginning his screen career beyond just playing an extra for $7.50 a day. At one performance John Barrymore reportedly showed up and after watching the play, went backstage and “walked into March’s dressing room with a glowering look, then suddenly relaxed, waxed charming and agreeable, and congratulated the jittery actor on a fine performance” Lawrence Quirk from The Films of Fredric March. 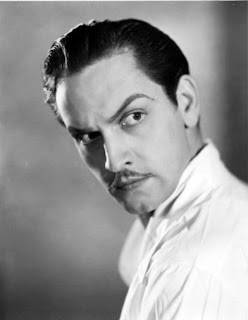 Ethel Barrymore disliked the play and criticized it roundly.
Posted by Sarah at 4:50 AM