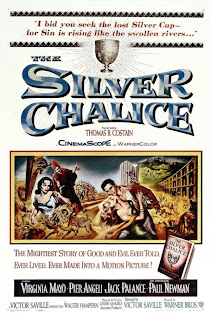 Quite possibly the worst classic film I have seen to date. Films like The Silver Chalice would have once defined how I summed up cinema from the fifties and early sixties which is why I have avoided that era until I started this blog. I have obviously changed my mind and I'd like to thank Fredric March and Geraldine Page for that. Without my loving and needing to see everything they are in, I never would have ventured past 1949.

Newman once said, "It's kind of a distinction to say that I was in the worst film to be made in the entirety of the 1950's." I wouldn't completely agree, I mean one does need to consider anything that involved Elvis Presley or Sandra Dee, yes?
Another reason I avoided the era and that I have stated before is that I am not a fan of Technicolor. I find it garish and at times distracting. However, worse than Technicolor is the monochrome theme that also dominated this era of filmmaking. The Silver Chalice is no exception with its stark and expressionless setting, an unsuccessful mixture of über neomodernism and old world religious artifacts closely resembling chotchkies you'd find in a seaside tourist shop. 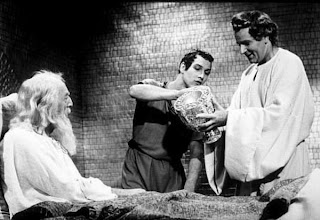 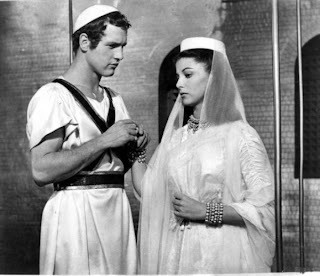 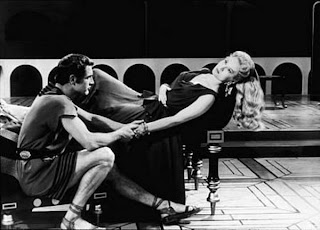 Basil (Paul Newman), a great artisan is commissioned to cast the cup of Christ in silver and sculpt around its rim the faces of the disciples and Jesus himself. He is broken out of the slavery he was put in his uncle Linus (Herbert Rudley) who refused to acknowledge Basil as his brother’s adopted son and taken to Jerusalem and eventually Rome to complete his task. Though he has a hard time sculpting Jesus’ face despite the descriptions he is given, he has a vision while in Rome searching for the disciple Peter and decides to convert to Christianity. A simple story and one that could have been pulled off if this was the only storyline that needed attention. Unfortunately, the film has a parallel plot that instead of flowing congruently to sum up the whole of the film, clutters it while some key aspects fall to the wayside.
The parallel plot involves Helena (Virginia Mayo) the slave girl whom Basil helps to escape from his father Ignatius’ household when they are young. Promising to love one another always, Helena eventually becomes a great courtesan and partner to Simon the Magician (Jack Palace). Having traveled all over, she comes back to Greece, learns of Basil’s enslavement and his uncle's plans to have him killed. She finds Basil, warns him and then moves on. Basil is rescued instead by Luke, a physician and disciple of Christ, who takes him to the house of Joseph of Arimathea (Walter Hampden) who will commission Basil to make the chalice for the cup of Christ. Meanwhile, Helena and Simon the Magician also travel to Jerusalem for a far greedier task. Simon is commissioned by Mijamin (Joseph Wiseman), the leader of a group of Sicarii assassins who wants to use Simon’s magic to lure the Christians away from their religion and into his army. However, Simon has bigger plans, he wants to create his own religion. In order to have people believe in him he must destroy the one material thing that means the most to the Christians- the cup of Christ. After only one failed attempt at getting said cup, Simon who, with Helena, has followed Basil to Rome, comes into favor with Caesar Nero and claims he can fly. He finds his own demise in his daring, prompting Nero, who supported Simon’s claim and doesn’t want to cheat his audience out of their entertainment, to sacrifice Helena.Back to the main plot, there is Deborra (Pier Angeli), Joseph of Arimethea’s granddaughter who has loved Basil from the start. Mistaking his attentions for love, she boldly asks to be tied to him through marriage so that she can inherit her dying grandfather’s fortune and further Christianity with it. Basil, though he loves Helena but would never marry her, agrees and they are wed but not affectionate towards one another much to Deborra’s dismay. When Basil finally has his vision of Christ and decides to become Christian, he also decides he truly loves Deborra. Though the cup of Christ is lost in the ensuing mob after Simon’s death, the disciple Peter blesses them both and predicts the cup will reappear when mankind needs it most. (Like maybe when having to sit through this film.) 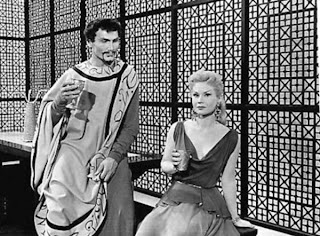 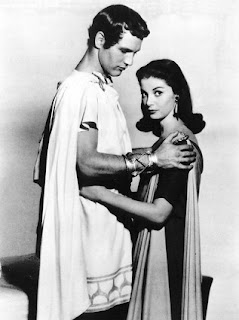 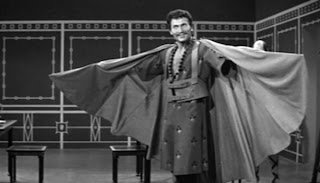 This was Newman’s first stab at Hollywood and it certainly didn’t make a great impression upon him. The Silver Chalice is full of wooden acting and ridiculous dialogue as if everyone but Jack Palance (the real treat of the film) knew they were making a bad picture. Newman knew it; he had several arguments with director Victor Saville at the risk of being labeled "an uncooperative smart-ass" over some aspects of the film. This combined with the unrealistic back drop has The Silver Chalice bordering camp proportions but ulitmately fails in that main simply because it isn't entertaining enough. Had Jack Palance been the entire focus of the film with his distinct, silky speaking voice continuously touting while donning outfits that looked like Adrian on a PCP kick designed them, this film would have been awe-inspiring. Awe. Inspiring.


Tonight on TCM!
TCM honors Honest Abe. Check it out!
Posted by Sarah at 5:00 AM