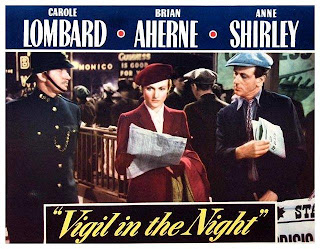 This wonderful film contains three great elements: Brian Aherne, a good plot, and a dramatic Carole Lombard. Having seen Lombard in comedies only, I was thrilled when I realized this was a dramatic piece. Better yet, I wasn't at all disappointed with it!
Anne Lee (Lombard), a quiet dependable and devoted nurse sacrifices her reputation and career when she takes the blame for her sister's negligence at nursing which results in the death of a child. Lee moves to the next town, Hepperton, after she elicits a promise from her sister to finish her her nurses train and gain her certificate as she has done. They can both then move on to London for better work. At the new hospital, Lee instantly wins over the staff as well as Mr. Bowley (Julien Mitchell), the hospital's main source of funds. All goes well until a nurse from her former position shows up to apply for a job. Lee was set to visit her sister that day to see her receive her certificate. While Lee is on the bus with Matron East (Ethel Griffies), this nurse tries to reveal what Lee did at her former job. However, before she can say anything damning, the bus suddenly crashes and Lee takes charge of getting all injured passengers- including the vindictive nurse- the proper care which includes calling upon Dr. Prescott (Aherne). Already impressed with Lee's ability and her quiet control in the face of danger, a friendship develops between the two. Prescott reveals his frustration with Bowley who denies the hospital much needed funds especially in face of a small pox epidemic that's bound to break out soon.
The next day Lee's sister Lucy (Anne Shirley) shows up at the hospital with a husband in tow. Joe Shand (Peter Cushing) was once in love with Lee but she refused his proposal due to her dedication to nursing. Joe and Lucy are headed to London without Lee. Reeling from that disappointment Lee then must deal with Bowley's when his attentions become more ardent. He tries to woo Lee with lavish gifts which she denies, imploring him instead to look to Prescott's cause and donate money to the hospital. When Mrs. Bowley catches her husband mid-woo, she demands Lee's dismissal and accuses Prescott of sending her to pester her husband.
Forced to leave, Prescott, who's aware of what really happened, begins to write her a recommendation but also reprimands her for saying anything to Bowley which he considered he told her in confidence. Humiliated, Lee leaves without the recommendation.
When she reaches London, she finds Lucy's husband Joe alone and drunk in their apartment and her sister being charged with negligence once again in conjunction with a nursing home. At Lucy's trial, Dr. Prescott comes to the rescue, revealing the scam that the nursing home has been run under and clearing Lucy's name from any involvement, stating she was following a crooked doctor's orders.
Meanwhile, the small pox epidemic has broken out and the Lee sisters go back to Hepperton to volunteer in the quarantined area. Their courage encourages other nurses who before, refused to volunteer- this includes the vindictive nurse who benefited from Lee's care after the bus accident. Needing a more sanitary set up, Lee takes charge and orders the supplies and has the bills sent to Bowley. Enraged, he confronts her only to find the whole staff is backing her and now his own son has succumb to the pox and is quarantined. Now seeing the error of his ways he promises Prescott that he will be more cooperative in the future.
That problem solved, Lucy is given the responsibility of sitting with Bowley's son through the night. After resuscitating him with mouth to mouth, the boys fever breaks and he's through the worse. However, Lucy's devotion comes at the cost of her own life- a sacrifice she is glad to make. Lee barely has time to mourn as a mine accident causes the next series of chaos at the hospital. Before she and Prescott rush off to save lives, he admits his love for her. 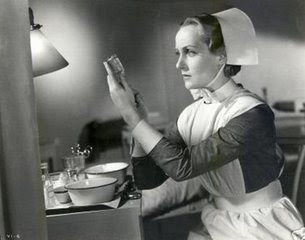 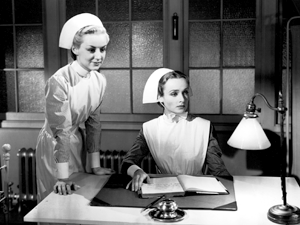 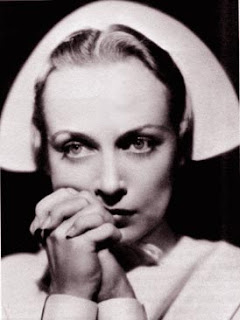 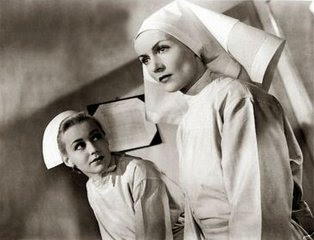 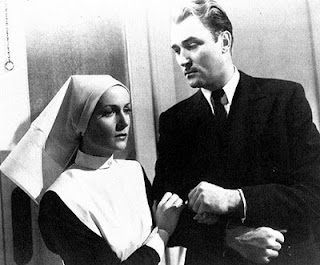 As I said before, this movie had great elements, but I was most impressed with Lombard's dramatic turn. Her quiet way of speaking while portraying a resilient inner strength is borderline eerie. Having been cast in comedies due to her innate ability to cause laughter, Lombard desperately wanted to show her serious side. Vigil in the Night is evidence that she could be just as serious as she was funny. Imagine the possibilities of what she could have brought to the screen if her life hadn't been tragically cut short.
The Lion In Winter (1968) England's Henry II and his estranged queen battle over the choice of an heir. Cast: Peter O'Toole, Katharine Hepburn, Jane Merrow, John Castle Dir: Anthony Harvey
Posted by Sarah at 5:23 AM