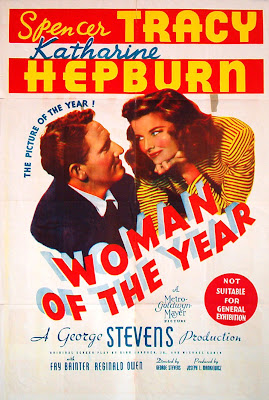 Woman of the Year is the first of nine films to feature Spencer Tracy and Katharine Hepburn and the chemistry between these two on this film practically jumps off the screen. It has been noted that the characters they play in the movie are very similar to the actors in real life with Tracy being the more laid back man's man and Hepburn the more egotistical and strong-willed but tender-hearted. Indeed, she had such strength to obtain the rights to Woman of the Year as well as pick the director, leading man, and her own salary.
George Cukor was a natural choice to direct as he was a close friend of Hepburn's and had directed her often. However, Hepburn wanted Tracy to be as comfortable as possible and so she hired George Stevens, who had directed her in Alice Adams (1935). As Hepburn said, "I just thought he (Tracy) should have a big, manly man on his team - someone who could talk about baseball." That "manliness" led to a different ending and the character of Tess Harding getting her just desserts.
"The original ending of the Lardner-Kanin script had Tess Harding take an honest interest in baseball (her husband's passion) and become more enthusiastic than he at the game, which implied not compromise but growth and love. But Mankiewicz and Stevens were concerned that 'the average American housewife, seated next to her husband, staring for two hours at this paragon of beauty, intelligence, wit, accomplishment, and everything else, (could not) help but wonder if her husband (wasn't) comparing her very unfavorably with this goddess he sees on the screen.' Stevens, who for all his charm was a dedicated male chauvinist, decided with Mankiewicz that Tess Harding had to have her comeuppance."
As for Hepburn and Tracy's first meeting, it has become legend. Joseph Mankiewicz, was the producer of the movie, and introduced the actors to one another in the MGM commissary where Hepburn is quoted as saying, "I'm afraid I'm a little tall for you, Mr. Tracy." To which Tracy replied, "Don't worry, Miss Hepburn, I'll cut you down to my size." - Thanks to TCM for some of the facts. 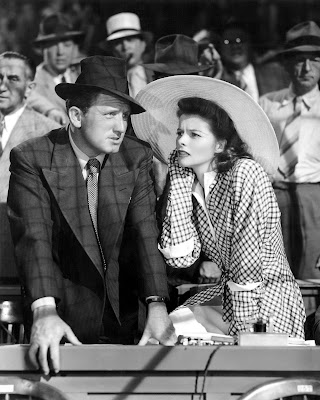 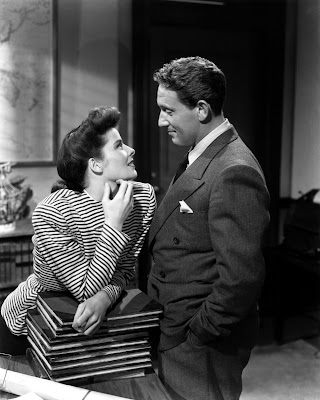 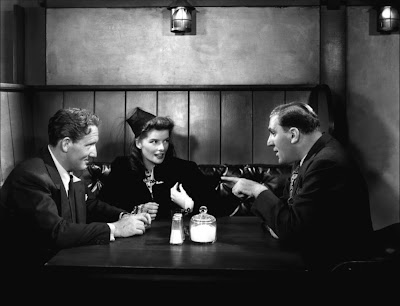 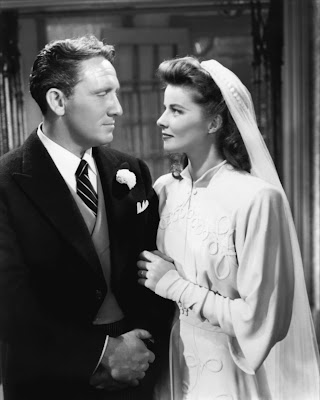 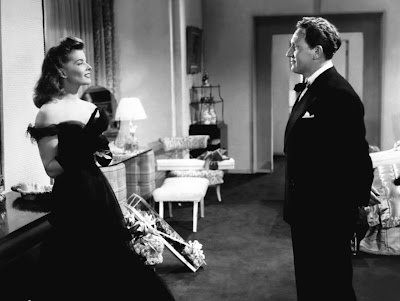 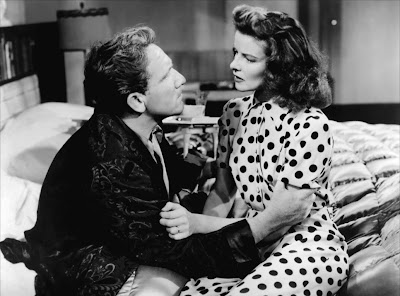 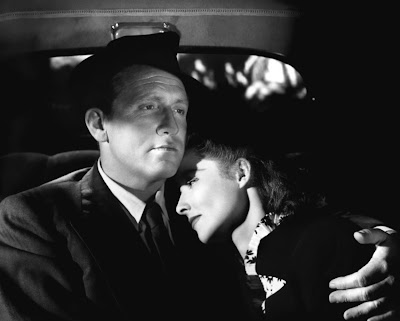 Woman of the Year is a love story between two journalists Sam Craig (Tracy) and Tess Harding (Hepburn). Craig is a sportswriter and Harding a political affairs columnist. After the two have a feud in their columns over the necessity of the American sport baseball, they meet meet one another and it's love at first sight for Craig. Harding leads him on for awhile but the sparks are there. Craig introduces Harding to baseball and before the game is over she is an avid fan. Harding introduces Craig into her world and he discovers she is a polyglot educated in various prestigious European universities and as an ambassadors daughter, has traveled the world. Despite their differences in background their romance leads to marriage only to be confronted by one conflict after another. Though Craig knew Harding was a busy woman, he apparently thought that marriage would change her, make her settle down. Harding understandably is confused by his attitude and finds ways to avoid the conflict by making love to him. It takes Craig's leaving her and the marriage vows she hears at her father's wedding to realize that she wants Craig more than she wants her career. To prove she is committed to her husband, she sneaks into his house and tries to prepare him breakfast, only to fail. Craig berates her for always going to extremes, telling her he doesn't want Tess Harding or Mrs Craig, but can't she be Mrs Tess Harding-Craig? To which Tess happily agrees that she can.
Though the premise of the film is obviously chauvinistic, making Harding an insensitive woman because she has a successful career, I have to consider the era and look beyond that. Woman of the Year makes this easy as it is wonderfully directed. As noted before, Hepburn can be annoying especially when it comes to some of her mannerisms. However, they were completely absent in this film, she was also more gorgeous than I have ever seen her and her witty banter with Tracy was infectious. Tracy, in turn, came off less brutish than other films I have seen him. He was very laid back in this film considering all the indignities he had to endure, like being called Mr. Harding. As mentioned before, the chemistry between Tracy and Hepburn is so apparent that it makes the film all the more believable. Thus far, this is my favorite of the Hepburn-Tracy pairings.
Side note:
When Hepburn questions Tracy on how the rules of baseball are played in Woman of the Year, I am reminded of a story that James Stewart once told Peter Bogdanovich which he put into his book, Who the Hell’s in It.
“The story was about the only time he had taken Katharine Hepburn flying. She had come over to him on the set of The Philadelphia Story and said, in her evidently typical terse way, ‘You fly.’ Telling it, Jimmy did a take as though startled, and then looked around, glanced down and back up before he said, ‘Yeah…’ With the same kind of military dispatch, Hepburn then told him that she would meet him the next morning, seven-thirty a.m. at the Santa Monica Airport (where Stewart used to keep his small plane). The Hepburn tale continued with Kate arriving punctually, and then, while airborne, leaning forward over his shoulder and asking him peremptorily why he did every single thing he did. ‘Why did you do that!?’ Patiently, he would try to explain. ‘Why!?’ More patient explaining. He flicked a switch. ‘Why did you do that!?’ Further polite explanations, funnier each time. Eventually, they land, she exits, says thanks, and never even mentions flying to him ever again. ‘Course, she did a lawta flying with Howard Hughes,’ he concluded, with the self-deprecating, slyly sexual, implication that Stewart obviously couldn’t match up to Hughes."


Tonight on TCM! Well look at that! Another Hepburn-Tracy pairing!
State Of The Union (1948) A presidential candidate fights to keep his integrity and his wife during a grueling campaign.Cast: Spencer Tracy, Katharine Hepburn, Van Johnson, Angela Lansbury Dir: Frank Capra
Posted by Sarah at 6:00 AM