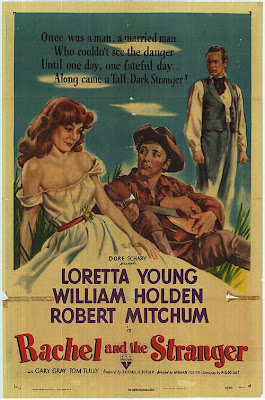 After his beloved wife Susan passes and Big Davey (William Holden) realizes that his son is growing “woodsy” so, he heads to the local stockade to make inquiries about getting a new wife. What Big Davey didn’t count on was being so easily accommodated. Parson Jackson knows of a bondswoman named Rachel (Loretta Young) that can be bought. So, Big Davey leaves the stockade with a new and timid wife and a resentful son.
Months go by with Rachel trying to prove herself to both the Daveys and making no headway until an old family friend drops by to stay awhile. Jim Fairways (Robert Mitchum) is just what every guy needs to realize he has a beautiful woman for a wife. Fairways is charming and considerate, he doesn’t treat Rachel as a servant but as an equal and having seen her charms immediately, he falls for her. Big Davey’s eyes are suddenly opened when he sees how Rachel blossoms under Fairways attention. When he finally thinks Fairways is going to leave, he is surprised and angry that Fairways offers to buy Rachel from him, worst yet, Fairways makes a direct proposal to Rachel. However, Rachel, has had enough of both Fairways flirtatiousness and Big Davey’s indifference, not to mention dealing with an ungrateful stepson and so decides to leave, feeling that she has more than made of for the $18 that Big Davey used to buy her.
With two handsome men hot on her trail, Rachel must decide if either of them are worth all the trouble. 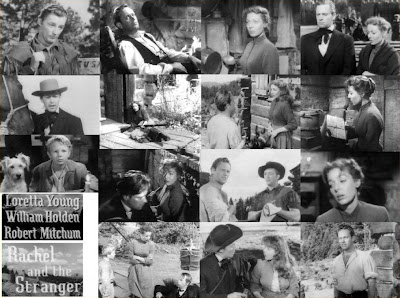 Thanks to Meredy for the screen shots!

Overall, I really liked this film. A young Holden and Mitchum are always pleasant to look upon and Loretta Young is a georgeous as ever. Though I have not seen many of Holden's films- as mentioned before, I especially liked him in this one because he played a much softer character. He obviously got a better hold on his acting skills and came off quite well with his mixture of contriteness, shyness, and blustering jealousy as Rachel's less-than-perfect husband. As for Mitchum, that guy is a human quaalude. I like him though, you can't help but like him. I bet he was awesome in a chaotic situation.

Side note:
Modern sources note that RKO rushed the picture into release to take advantage of the publicity surrounding Mitchum's September 1948 arrest for marijuana possession.

Tonight on TCM!
Some Like It Hot (1959) Two musicians on the run from gangsters masquerade as members of an all-girl band. Cast: Marilyn Monroe, Tony Curtis, Jack Lemmon, George Raft Dir: Billy Wilder

Email ThisBlogThis!Share to TwitterShare to FacebookShare to Pinterest
Labels: Holden, Mitchum, Rachel and the Stranger, Young