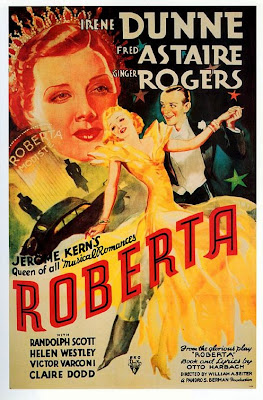 John Kent (Randolph Scott), a former star football player at Harvard, goes to Paris with his friend Huck Haines (Fred Astaire) and the latter's dance band, the Wabash Indianians. Alexander Voyda (Luis Alberni) has booked the band, but refuses to let them play when he finds the musicians are not the Indians he expected, but merely from the state.
John turns to the only person he knows in Paris for help, his Aunt Minnie (Helen Westley), who owns the fashionable "Roberta" gown shop. While there, he meets her chief assistant (and secretly the head designer), Stephanie (Irene Dunne). John is quickly smitten with her.
Meanwhile, Huck unexpectedly stumbles upon someone he knows very well. "Countess Scharwenka", a temperamental customer at Roberta's, turns out to be his hometown sweetheart Lizzie Gatz (Ginger Rogers). She gets Huck's band an engagement at the nightclub where she is a featured entertainer.
Two things trouble John. One is Ladislaw (Victor Varconi), the handsome Russian doorman/deposed prince who seems too interested in Stephanie. The other is the memory of Sophie (Claire Dodd), the snobbish, conceited girlfriend he left behind after a quarrel over his lack of sophistication and polish.
When Aunt Minnie dies unexpectedly without leaving a will, John inherits the shop. Knowing nothing about women's fashion and that his aunt intended for Stephanie to inherit the business, he persuades Stephanie to remain as his partner. Correspondents flock to hear what a football player has to say about feminine fashions. Huck gives the answers, making a lot of weird statements about the innovations John is planning to introduce.
Sophie arrives in Paris, attracted by John's good fortune. She enters the shop, looking for a dress, but is dissatisfied with everything Stephanie shows her. Huck persuades her to choose a gown that John had ordered discarded as too vulgar. When John sees her in it, they quarrel for the final time.
John reproaches Stephanie for selling Sophie the gown. Terribly hurt, Stephanie quits the shop. With Roberta's putting on a fashion show in a week, Huck takes over the design work, with predictably bad results. When Stephanie sees his awful creations, she is persuaded to return to save Roberta's reputation.
The show is a triumph, helped by the entertaining of Huck, Countess Scharwenka, and the band. The closing sensation is a gown modeled by Stephanie herself. At the show, John overhears that she and Ladislaw are leaving Paris and mistakenly assumes that they have married. Later, he congratulates her for becoming a princess. When she informs him that Ladislaw is merely her cousin and that the title has been hers since birth, the lovers are reunited. Fred and Ginger do a final tap dance sequel. - Wikipedia 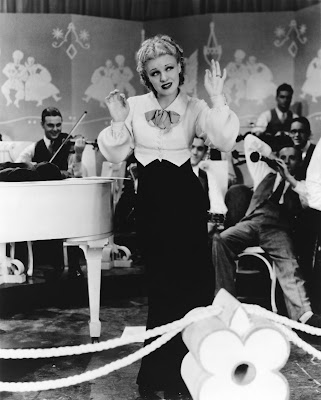 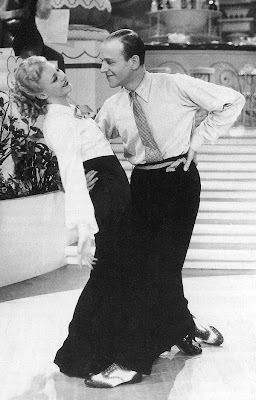 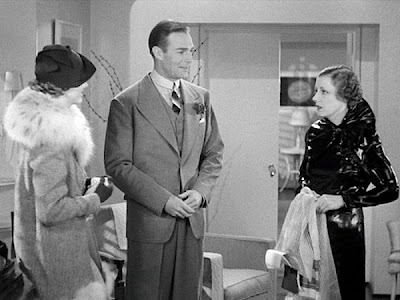 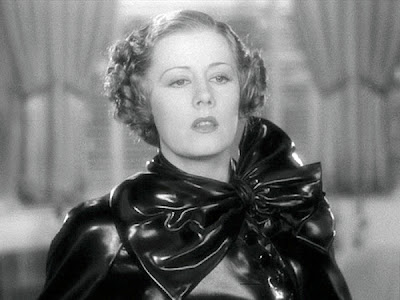 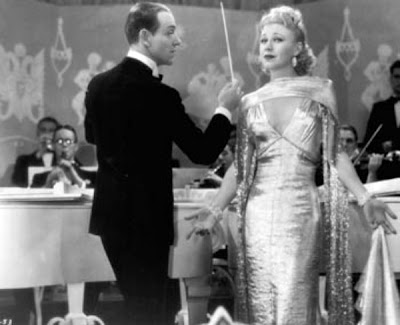 I'm sure I have seen an Astaire/Rogers picture before but I can't seem to recall which it was so I am using Roberta as my first. Roberta is the third of ten dancing partnerships of Fred Astaire and Ginger Rogers and I thought it was an injustice that they received second billing on this film because they totally carried it. Irene Dunne is a favorite of mine but I guess I only like her as a screwball comedienne, she was simply flat in this picture. An accomplished singer in her own right, I couldn't help but feel that she sang too much in this film- though I did enjoy her version of "Smoke Gets in your Eyes" which was written specifically for the Broadway version of Roberta (My favorite song from The Platters, I assumed they had written it). The storyline for Roberta is weak with a lot of attention to the fashion including a fashion show. Though there were some awfully beautiful gowns, even the one John finds "vulgar", it was reminiscent of Fashions of 1934 sans William Powell to give it a little punch and so I considered it a snore. The only highlights of the film are when Astaire and Rogers dance and sing- especially when Rogers sings "I'll Be Hard to Handle". Her accent which was an homage to the Polish-born actress Lyda Roberti who played the role on Broadway was impeccable.

Side note:
Before she became the world's most famous housewife, Lucille Ball, who appears uncredited in this film as a fashion model, really was a fashion model for designer Hattie Carnegie. With a body and face similar to Carole Lombard, she ironically modeled clothes for Lombard once. 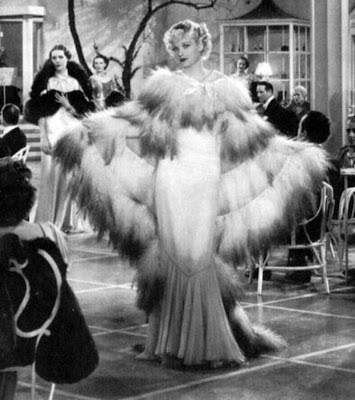 Tonight on TCM!
The Treasure of the Sierra Madre (1948) Three prospectors fight off bandits and each other after striking-it-rich in the Mexican mountains.Cast: Humphrey Bogart, Walter Huston, Tim Holt, Bruce Bennett Dir: John Huston
Posted by Sarah at 5:14 AM