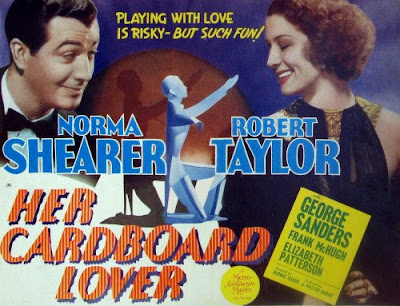 Songwriter Terry Trindale Robert Taylor) is attracted to Consuelo Croyden (Norma Shearer) When he finally works up the courage to approach her and express his feelings, it's to no avail. Blinded by his love, he mistakenly runs up a $3,200 gambling debt to her. Consuelo agrees to hire him as her cardboard lover to work off his debt as well as discourage the attention of Tony Barling (George Sanders), to whom Consuelo once was engaged but left because of his womanizing ways. 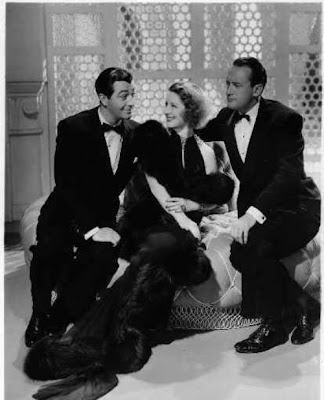 Four weeks later, Consuelo finds herself still saddled with Terry, who has refused to accompany his songwriting partner Chappie Champagne (Frank McHugh) to New York City to promote their latest tune. Consuelo insists she no longer has any interest in Tony and offers to cancel the rest of Terry's debt so he can join Chappie. Terry departs, and moments later Consuelo receives a call from whom she thinks is Tony and invites him to the house. Instead it is Terry who called and when he shows back up to Consuelo's a fight ensues. Complications arise when Tony actually does arrive on the scene and finds Terry. When Terry refuses to admit the that he and Consuelo are not lovers, an angered Tony departs for his hotel with Terry not far behind. The two men engage in a brawl and eventually are arrested. 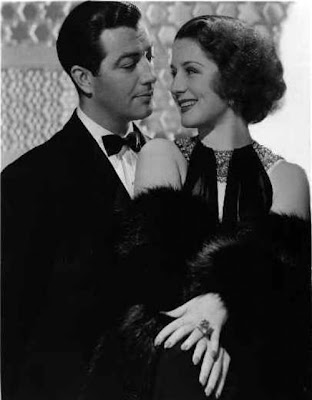 During their hearing on charges of disturbing the peace and assaulting a police officer, Terry finally takes Consuelo's actions as proof that she will never love him. But upon kissing Tony, Consuelo realizes she's no longer in love with him but with Terry. So, she has Terry arrested again and proves her love in the courtroom.

I actually really liked this film, I thought it was hilarious. Apparently it got bad reviews and was the cause for Norma Shearer to go into retirement. Well, she did pick this film over Now, Voyager and with the success of that compared to the failure of Her Cardboard Lover it seems understandable that she would be despondent. I think poor Norma was always having to prove she could act.
I thought she did wonderful in the film. I was delighted to see that she did not rely on many of her annoying mannerisms she displays in her 20's and 30's films. The hand in the hair, the lost hope look that made her head swivel back and forth, or the hand to cheek when shock, dismay, or happiness or really anything happened. She was much more restrained in this film and mature. Though she does not have great comedic timing, she acted her part well. Especially when she confronted Terry about leaving her alone to make her own decisions. That scene kept building and building and you can feel her frustration and desperation when Terry simply won't budge.
This was my second Robert Taylor film. I had first seen him with Jean Harlow in Personal Property. I thought he was wonderful in both films. He plays a great innocent but all-knowing dope. I was never much interested in him when he was up against the likes of Cooper and Grant but I would definitely take a gander at some of his other films.
Overall the film was great. My only complaint is that some of the scenes such as when Consuelo hires Terry and when Consuelo tries to get rid of Terry were entirely too long.
The film also features another favorite actor of mine, George Sanders playing his usual slimy self and it's fantastic. I also want to point out Frank McHugh who I have never written about before. He was a wonderful character actor and always a great addition to a film even if the film wasn't so great. I'll need to do a post on him.

I heart Gene Wilder.
Posted by Sarah at 5:34 AM