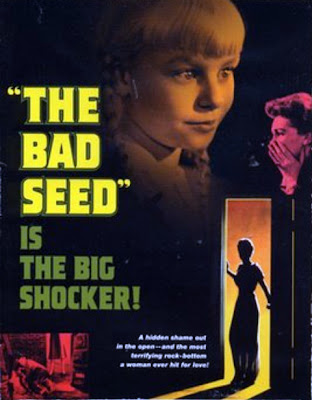 This was a movie that I had not seen in years. I was so excited when I saw that TCM was going to feature it this month. I cannot remember how old I was when I first saw it, I just know that the little girl Rhoda was frightening and that I have always had this movie in the back of my mind. 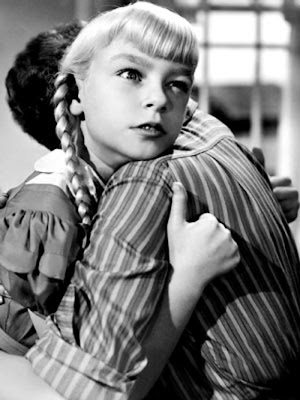 Synopsis:
Christine Penmark (Nancy Kelly), is a mother slowly unnraveling as she realizes that her eight-year-old daughter, Rhoda (Patty McCormack), is a murderer. Prompted by strange dreams and psychiatric theories, Christine has always wondered if she was an adopted child. A visit from her father reveals that she is actually the daughter of Bessie Denker, a well-known serial killer. This knowledge along with Rhoda's behavior convinces Christine that Rhoda is a sociopath (a term not widely used in 1956). Like her grandmother, Rhoda has no conscience and will kill to get whatever she wants. By the time Christine puts the truth together, Rhoda has already killed three people (an old lady for a snowglobe, classmate Claude Daigle for a penmanship medal Rhoda thought she deserved to win, and Leroy the creepy janitor who teases her about Claude's murder). Rhoda is exceptional at manipulating adults whereas children her age cannot stand her. 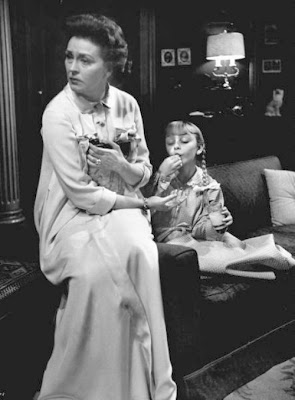 No longer able to simply sit by as her daughter continues her murdering spree, Christine decides to take matters in her own hands by giving Rhoda a lethal dose of sleeping pills and shooting herself in the head- both unsuccessful attempts. Considering how the movie ends, if Christine had waited a little longer, God (I'm assuming that's part of the moral) takes things into His own hands. 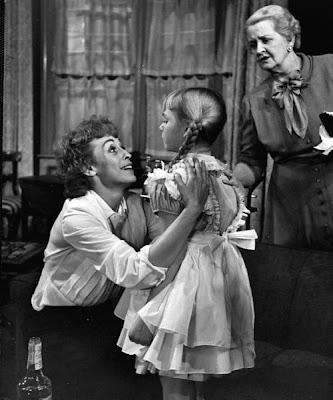 An interesting aspect of the film is the debate of whether a child is evil due to their environment, a firm belief in 1956 or whether it's a part of their genetic make-up. I'm always a little blown away at how little we knew even 50-60 years ago. It makes me wonder what beliefs we hold now will be incorrect years from now. 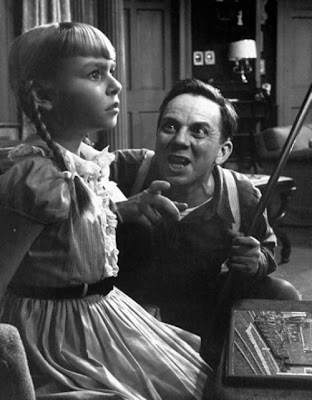 Overall the film was very well done. The stand out performers were Henry Jones as Leroy Jessup, the janitor; Eileen Heckart as Mrs. Daigle, Claude's mother; and of course, Patty McCormack as Rhoda. I personally could have done without Nancy Kelly's dramatic flair. She did not transfer from stage to film as well as the others who had also been in the Broadway version of this story. 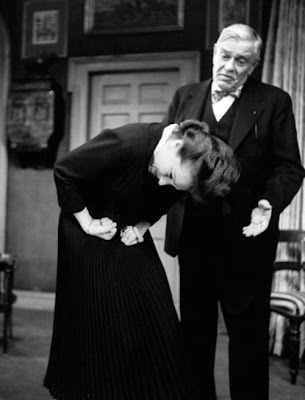 Interesting fact:
The original ending had Rhoda surviving, and her mother dying. The Motion Picture Production Code in effect at the time, however, required that "Crime shall never be presented in such a way as to throw sympathy with the crime as against law and order." The usual interpretation of this was that criminals weren't allowed to "get away with it." Because of this, the ending was changed.
Tonight on TCM!
To Catch a Thief (1955) A retired cat burglar fights to clear himself of a series of Riviera robberies committed in his style.Cast: Cary Grant, Grace Kelly, Jessie Royce Landis, John Williams Dir: Alfred Hitchcock
Posted by Sarah at 5:42 AM