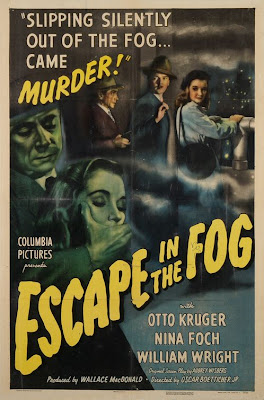 It's the story of an expert in psychological warfare (William Wright) who is given a secret mission to deliver some wartime documents from San Francisco to the Far East. German agents, however, have gotten wind of the plan and spend the movie trying to capture Wright before he can leave the city. Before we see all this, however, we are introduced to a Navy nurse on leave (Nina Foch) who has a dream of Wright being attacked by two men on the foggy Golden Gate Bridge - but only after she awakes does she actually meet Wright. As she tries to figure out the meaning of her dream, she becomes his unwitting partner as he tries to outwit the Germans; naturally the two also fall for each other (in an unconvincing romantic subplot). - TCM

The romantic subplot isn't the only problem. In a time where telling someone you had premonitions of their death before you ever met them was a sure way to get locked up in the looney bin, Eileen Carr's (Nina Foch) dream is never really explained or questioned. Not even when Barry Malcolm (William Wright)is involved in a secret mission where he should be questioning all those he comes into contact with. How is he to know Eileen is not a spy, especially when she magically shows up and saves him from being murdered? Yet, again and again he trusts her with information that can and will fall easily into the enemies hands.
Though a B movie and though on a budget, one would think a little more thought could be put into the movie. Eileen wears the same clothes throughout the film, even in her dream. The relationship between her and Barry evolves too quickly and for someone who has just left a hospital due to nerves, she involves herself too deeply in Barry's dangerous "secret mission". Why does Barry carry a federal agent's badge but carries out missions in Hong Kong? And if he is really such a great agent, which is why he was picked for this particular mission, how come he keeps getting caught up in the enemies hands and perform acts like igniting his lighter in a room quickly filling with gas? Beyond Barry's incompetence, why is no one questioning the man with the obvious German accent? He is allowed into places and masquerades as people that any smart person would question. Given the timeframe again, post WWII and the conflicts which make it imperative for Barry to travel to Hong Cong, why is no one suspicious of the German?
Overall, the film was horrible. It had a lot of potential but apparently time and money come before detail and precision.

For Boetticher, these early B productions were simply a training ground. As he later wrote in his memoir, When in Disgrace: "Everything involved with my first five films at Columbia was a learning experience. These little black-and-white pictures were made in twelve days for one hundred thousand dollars....Harry Cohn made sure that I had top old-time cameramen. They were supposed to be there to help me, but I soon discovered they were there to show me what they knew and how very mistaken I was about everything I set out to accomplish. Don't misunderstand me, they were all fine gentlemen. But I was young, and green as grass, and cocky, and consequently, my aged cinematographers and I never really advanced to the "palzy" stage. I invented a system that worked. When one of them questioned me about a shot I had requested, I merely shook my head, patted him on the arm, and said 'You really don't understand what I'm trying to do, do you?' Then I walked away. Of course, most of the time they were right and I was wrong, and I sensed it. But, being wrong as a film director can cost you a hunk of prestige in a hurry. So I faked it....I really faked those first five [pictures] with a bundle of phony confidence."

Tonight on TCM!
Anthony Mann!
Posted by Sarah at 5:58 AM

Email ThisBlogThis!Share to TwitterShare to FacebookShare to Pinterest
Labels: Boetticher, Escape in the Fog, Foch, Wright