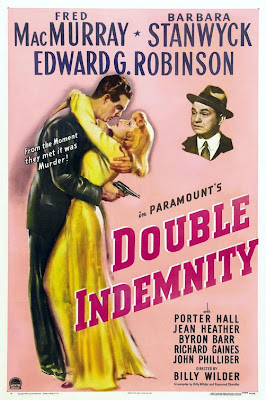 Double Indemnity, the epitome of the film noir. The standard in which we hold up any film noir to. The plot is a good one and well played out. There is a building of suspense in the murder scene as well as afterwards when Barton Keyes denies any foul play but then starts to suspect and build a case agaimst Phyllis Dietrichson. Though Walter Neff is supposed to be a tough guy, and though he has committed a terrible crime, you can't help but feel sorry for him. Especially as his friendship with Lola Dietrichson unfolds and elements of Phyllis Dietrichson's are laid out in the open. There is a heavy feeling of Neff's predictment, after the murder and throughout the rest of the film. I found that I was trying to figure out if there was a possibility for him to escape and start anew. There was, he could have completely washed his hands of the crime, laid the blame at Nino and Phyllis' feet but he underneath the hardboiled front, Neff has a heart and sacrifices his freedom for yet another woman, Lola Dietrichson. Barbara Stanwyk plays the perfect jaded wife. First a victim and then the selfish, greedy monster she secretly is underneath it all. 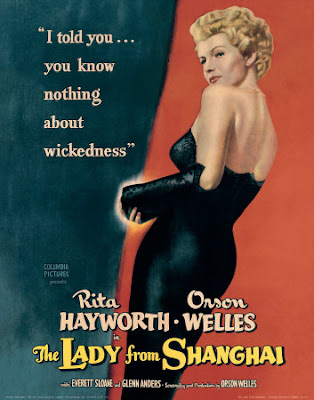 Simply put, The Lady from Shanghai was hard to follow. It had moments of cinematic forward thinking with elaborate backgrounds and metaphoric dialogue but the story, though a good one, fell flat. I was confused throughout most of the film and annoyed with Rita Hayworth's soft-spokeness, Orson Welles broken Irish dialect and Glenn Anders attempts at acting (seriously, he was scary and not in a good way). Again, the story was a good one and had it been played out without so much focus on the main character, Michael O'Hara, his inner demons and his relationship with Elsa Bannister in backgrounds that were more distracting than their own back story, this could have been a very successful film. Also, Orson Welles does not play his character well. This man is supposed to be a seasoned sailor, a man of many worlds, a street scholar and yet he is so easily suckered into Grisby's plan with no real concern for the holes in it such as the typed confession. Orson Welles feels more suspicion for Elsa Bannister's feelings for him which she clearly puts out into the open, than he does for getting involved in what's supposed to be a faked and confessed murder with a man who is clearly a nutbag. It just doesn't make sense.

Tonight on TCM!
The Lawless (1950) A newspaper editor takes on the cause of oppressed migrant workers.Cast: MacDonald Carey, Gail Russell, John Sands, Lee Patrick Dir: Joseph Losey
Posted by Sarah at 8:31 AM