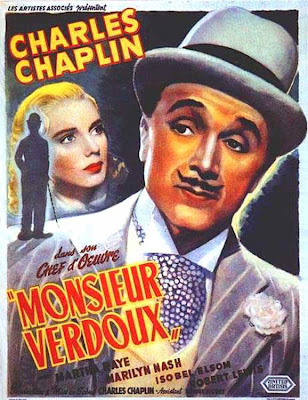 Last night I watched Monseiur Verdoux, a movie based on an idea of Orson Welles and directed by and starring Charlie Chaplin. It was the first film to feature Chaplin outside of his regular "Tramp" getup. Set in the Thirties, the film is about Henri Verdoux, once a loyal and hardworking banker, he is unfairly pushed into unemployment after thirty years of service. With a wife and child to take care of Henri Verdoux turns to sociopathic methods of attaining income by marrying wealthy, middle-aged women and murdering them.

Though Henri Verdoux is a cool character in this film, dispatching females with alarming detachment, there are moments of hilarity one can only expect from Chaplin. His face is a work of art when it comes to displaying emotions. His scenes with Martha Raye are priceless. Beyond the hilarity and at times suspense (one day he meets a younger woman on the street and feels she will be the perfect guinea pig for his new death potion; it takes ten minutes for the fate of the girl to be revealed and even when it comes out ok, you are still on the edge of your seat wondering will if Henri Verdoux will change his mind) there is astute point being made from his actions. Henri Verdoux dismisses his killing of a few women as no worse than the highly-praised killing of large numbers of people in every war.

"However remiss the prosecutor has been in complimenting me, he at least admits that I have brains. Thank you, Monsieur, I have. And for thirty-five years I used them honestly. After that, nobody wanted them. So I was forced to go into business for myself. As for being a mass killer, does not the world encourage it? Is it not building weapons of destruction for the sole purpose of mass killing? Has it not blown unsuspecting women and little children to pieces? And done it very scientifically? As a mass killer, I am an amateur by comparison. However, I do not wish to lose my temper, because very shortly, I shall lose my head. Nevertheless, upon leaving this spark of earthly existence, I have this to say: I shall see you all...very soon...very soon."

Though not well received in America when it came out in 1947, most likely due to the post-war era, and Chaplin's political and private scandals, it was nominated for the 1948 Academy Award for Best Original Screenplay and broke box-office records with it re-release in 1964, gaining enough of a following for it to be considered a cult film. I highly suggest seeing it if you have not.
Tonight on TCM!
Mexican Spitfire(1940) A businessman's aunt enlists his ex-wife to break up his marriage to a temperamental Latina.Cast: Lupe Velez, Leon Errol, Donald Woods, Linda Hayes Dir: Leslie Goodwins
Posted by Sarah at 6:58 AM

Email ThisBlogThis!Share to TwitterShare to FacebookShare to Pinterest
Labels: Chaplin