"I'm going to have another drink, would you like another fish?"

Comedy was a hot commodity in our household growing up so, naturally, you will find the Arthur and Arthur 2: On The Rocks in my exclusive DVD collection. If you have not seen these films, I highly recommend them. There is something about the eighties that, in my mind, churned out some of the most fantastic comedy of film history. Don't even get me started on John Hughes!

Synopsis: Arthur, a drunk with no ambition is the heir to a vast fortune which he is told will only be his if he marries a girl his family finds suitable. Unfortunately, the girl- Susan- does not suit, despite her determination to marry and change Arthur into a better man. Arthur, accustomed to a rich lifestyle buckles under the pressure of being cut off and eventually proposes to Susan. Then he meets Linda, a girl with no money who he could easily fall in love with. Hilarity ensues.
Despite a predictable plot, the writing in this film, the actors, and the interaction between the characters is truly classic. These elements produced a rare occurence - a sequel that was almost as good. 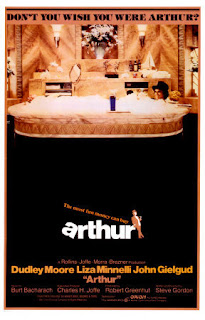 Both movies are full of wonderful actors. The most notable being the main characters. Dudley Moore couldn't have been a more perfect drunk. John Gielgud whom I have seen mostly in period peices, is the epitome of all good butlers, a smarter, wittier, funnier version of his richer counterpart. The way he delivers his one-liners honestly makes the film priceless. Liza Minelli is fantastic. It's such a waste that she did not pursue more comedic roles in film because I think she has wonderful timing. 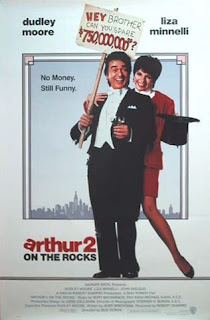 Arthur: Hobson, do you know what the worst thing is about being me?
Hobson: I should imagine your breath.

Susan: A real woman could stop you from drinking.
Arthur: It'd have to be a real BIG woman.

Hobson: Thank you for a memorable afternoon, usually one must go to a bowling alley to meet a woman of your stature.

Hobson: Thrilling to meet you, Gloria.
Gloria: Hi.
Hobson: Yes... You obviously have a wonderful economy with words, Gloria. I look forward to your next syllable with great eagerness.

Arthur: Do you know what I'm going to do? I'm going to take a bath.
Hobson: I'll alert the media.
Arthur: Do you want to run my bath for me?
Hobson: It's what I live for. [Arthur exits]
Hobson: Perhaps you would like me to wash your dick for you, too, you little shit.

The Letter (1940) A woman claims to have killed in self-defense, until a blackmailer turns up with incriminating evidence.Cast: Bette Davis, Herbert Marshall, James Stephenson, Frieda Inescort Dir: William Wyler ****